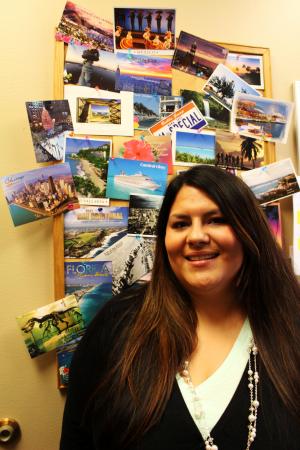 A wall of postcards from various places in Longoria-Navarro’s office serves as a conversation starter. By asking clients where they want to go in life, Longoria-Navarro learns about their thinking style and levels of motivation.

In honor of Pretrial, Probation and Parole Supervision Week, take a look into what it’s like to be a parole and probation officer for a unit that supervises some of the most challenging populations in our community.

It’s 2007 and Leticia Longoria-Navarro is in her senior year of college at Oregon State University. But she’s not on the OSU campus. She’s at the Oregon State Penitentiary, taking a class called Outside In, a sociology class on crime and punishment where OSU students learn alongside convicts.

Longoria-Navarro, now a parole and probation officer for sex offenders in Multnomah County, says this was her career-defining moment. Working on schoolwork side-by-side with inmates challenged all of Longoria-Navarro's previous notions about people in prison.

“I just saw the level of ability and potential for change, and the importance of leveraging strengths,” says Longoria-Navarro. “That’s when I knew I wanted to work in the criminal justice field.”

Longoria-Navarro has been working at the county for more than three years with the Department of Community Justice’s Sex Offender unit.

According to Longoria-Navarro, a typical day doesn’t exist in her job.

“This is one of the most dynamic environments I have ever worked in,” says  Longoria-Navarro.  "At any moment things can change dramatically. We can go from helping a client work through a crisis to taking someone into custody for safety concerns."

Longoria-Navarro works with a wide range of people, covering the whole gamut of high- and low-risk offenders. She meets with victims and convicts, including sex offenders and human trafficking perpetrators, offering support and resources for housing and family services, doing risk assessment, cognitive interventions and talking about treatment involvement.

As a lead parole and probation officer at the Sex Offender Unit for DCJ, Longoria-Navarro assists the managers in day-to-day duties of the unit, as well as training and coaching of staff in evidenced based practice initiatives such as Effective Practices in Community Supervision (EPICS), motivational interviewing, and case planning.  She is also a field training officer, and she mentors and trains new officers.

As a young girl growing up in Multnomah County, Longoria-Navarro saw many unmet needs for many people, which led to a lot of sad situations. As a self-described “people person,” Longoria-Navarro has always wanted to work in the community to connect people with the many resources that are offered.

Longoria-Navarro received her Bachelor’s Degree in sociology in 2007 from Oregon State University with a focus in criminal justice. In 2010, she graduated from Portland State University’s criminal justice master's program with an emphasis in offender reentry. In 2009, she took a position working in the Oregon Department of Corrections. As a contractor for an organization called Pathfinders of Oregon, Longoria-Navarro handled case management for students, taught parenting classes and basic cognitive skills.

While employed by the Department of Corrections, Longoria-Navarro realized the skills she was teaching were hard for her students to apply to their lives while in prison. The inmates lacked the opportunity to take advantage of resources in their community and interact with positive role models. Longoria-Navarro decided the best position for her to make a direct impact in the community outside of the institutions would be as a parole and probation officer.

In 2011, Longoria-Navarro joined the county workforce. She began to work collaboratively with clients, supporting them as they face the daunting task of reentering the community, following all of the guidelines of their supervision.

A common misconception about sex offenders is that they re-offend every time—in reality, sex offenders have a considerably lower rate of recidivism, compared to other types of offenders. Longoria-Navarro prides herself in individualized attention for each client.

While some people become jaded in the position, Longoria-Navarro knows she must keep an open mind.

In the midst of her exhausting work, Longoria-Navarro refuses to ditch her positive attitude.

“We see the worst in lots of people all the time,” she says. “If someone’s screaming at you, saying offensive things, you have to keep calm and collected. Keeping that strategic mind, being self-aware, and remembering the importance of your work makes all of the difference.”

Working with such a specific clientele and listening to their firsthand experience can be very overwhelming. The job does take an emotional toll on employees.

“Being a parole and probation officer is a stressful position,” Longoria-Navarro says. “The value to it and to the individuals we serve, the value outweighs the stress that we experience.”

An important aspect of work as a parole and probation officer (PPO) is self-care, usually by taking responsibility for their emotional wellbeing outside of the office.

“There is a cycle of vicarious traumatization for PPOs,” Longoria-Navarro says. “From listening to sex offenders talk about their struggles to victims speaking openly about their experiences, PPOs take on a lot of emotional pressure.”

The work environment is a collaborative space where parole and probation officers can share some of that experience. As a member of multiple committees, Longoria-Navarro is involved in decision-making processes, which lends to her dedication to the position.

“I get to be involved,” she says. “I get to have a voice, and in that way the county empowers us as employees.”

When Longoria-Navarro is not at work, she spends time with her five younger siblings and the rest of her large family, attending basketball and football games, dance recitals, and school events. She also enjoys customizing her new house and soaking up unconditional love from her Corgi-Chihuahua puppy.

The proclamation formally recognizes the work the department’s employees do to uphold public safety and assist offenders in becoming successful members of the community.

The Department of Community Justice serves a vital role in protecting our public safety & communities. We intervene to prevent the recurrence of crime among juvenile & adult defendants.