Joint Office’s St. Johns Village shelter celebrates opening: ‘Shining example of what it looks like when a neighborhood opens its arms’

May 26, 2021
Inside the last of the 19 sleeping pods to be filled at the St. Johns Village on May 21, 2021.
In May 2019, Commissioner Susheela Jayapal held her first-ever coffee meeting with constituents, part of her new role representing North and Northeast Portland on Multnomah County’s Board of Commissioners.

It was at Anna Bannana’s in St. Johns. And top of mind for many in attendance was the Joint Office of Homeless Services’ recently announced plan to create a services-focused, professionally designed shelter village on empty land leased from a neighborhood faith institution, St. Johns Church.

“It still counts as one of my best-attended coffees, and a lot of the folks who came did so because they wanted to talk about this village,” she said. “There were a lot of unknowns about the project; there were a lot of concerns; there was some fear.”

But what a difference two years can make. On Friday, May 21, 2021, Commissioner Jayapal was back in St. Johns to talk about that village project — no longer a controversial concept, but a tangible, manicured and dignified oasis of stability, providing 19 people with personal sleeping pods, a full kitchen, laundry services and a genuine sense of community, along with housing and case management services. 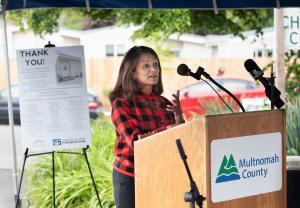 Commissioner Susheela Jayapal speaks during a ceremony to thank supporters of the St. Johns Village on May 21, 2021.
She gathered with her colleagues, including Chair Deborah Kafoury, Mayor Ted Wheeler and City Commissioner Dan Ryan, to help celebrate that milestone. They also thanked the dozens of businesses and hundreds of community volunteers who helped the Joint Office, shelter operator Do Good Multnomah, the City of Portland, the Home Builders Foundation and so many other partners on the way.

Speaking at the celebration, Commissioner Jayapal said she saw the seeds of that support even amid the doubts raised in the 2019 meeting. Some of the neighbors weren’t opposed to the idea of the village. And they went on to form and lead something called the St. Johns Welcomes the Village Coalition, eventually growing to include hundreds of people.

Not only did they write letters and testify at public meetings, but they also made signs and printed stickers. And then, as the village was getting ready to open, they stepped up to donate furnishings and help with finishing touches like painting, fence-building and mulch-spreading.

“Even at that early stage, there was also genuine community support — people who were nervous, but also wanted to help,” Commissioner Jayapal said. “Amid all the challenges, that community support was the essential ingredient — the glue that has held this project together, kept it going, and brought us to this moment.”

The program was constructed and developed with funding from the City of Portland, with program design and other support from the Joint Office, which will pay to operate the village. But in all, some 50 local businesses contributed time, materials and work toward the project, part of a coordinated effort that provided $200,000 of in-kind contributions, plus an additional $44,000 in cash grants to support the construction.

Along with those donors, more than 120 volunteers — including board members from the St. Johns Neighborhood Association and members of the St. Johns Welcomes the Village Coalition — provided 2,500 hours of service.

“Look at what we have created! This village-model shelter is not just a dignified place for participants to stay and receive the services they need to end their houselessness; this is an attractive addition to the neighborhood,” Mayor Wheeler said. 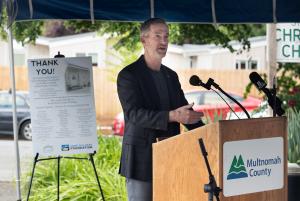 Mayor Ted Wheeler speaks during a ceremony to thank supporters of the St. Johns Village on May 21, 2021.
Beyond thanking the businesses who contributed, he offered his “sincerest thank you to St. Johns Church,” which also endured some early concerns from neighbors for leasing their land. Some neighbors accused the church of trying to cash in and said they wouldn’t be there to support the village. But two years later, Church leaders are key members of the St. Johns Welcomes the Village Coalition, helping to organize ongoing donations and volunteer work.

“Pastors David Libby and Janel Hovde endured some heat for this project, but their commitment to the vision made this all possible,” Mayor Wheeler said. “They have truly set an example for other institutions to follow. Thank you.”

“St. Johns Village is a shining example of what it looks like when a neighborhood opens its arms to becoming home for community members in need of shelter and services,” she said. 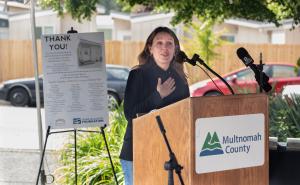 Chair Deborah Kafoury speaks during a ceremony to thank supporters of the St. Johns Village on May 21, 2021.
It’s integrated “into the fabric of its neighborhood.” That means its residents can access the same kinds of staples and amenities that anyone in our community needs — not just those who have a home. It also connects residents to a community, not just inside the village, but all around it.

“Things like grocery stores, a place to receive healthcare, a library and frequent transit,” she said. “And its location provides its new residents with the assurance of nearby supporters, advocates and volunteers. It’s that last point that I am especially thankful for.”

She said she was convinced that “their enthusiasm -- and their belief that people don’t stop being our neighbors just because they’ve lost a home — convinced many others to come along.” 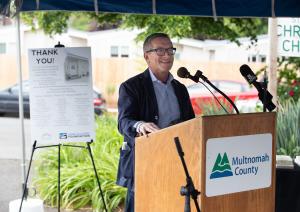 City Commissioner Dan Ryan speaks during a ceremony to thank supporters of the St. Johns Village on May 21, 2021.
Commissioner Ryan shared a story about speaking with his niece, the daughter of his late brother who died while experiencing homelessness.

"I'll just say that this morning, I was on the phone with my niece, and she's the daughter of my brother who passed away on the streets eight years ago,” he said during his remarks. “I was telling her what was going to happen later today and she said, 'Yeah, dad needed those kinds of services.'"

Chair Kafoury said services — the work to help people not just into a shelter bed, but then to the housing that will end their homelessness — is what elevates the village from a temporary shelter to a springboard for lasting stability.

“The thing that makes a site like this work is our model of helping its residents transition to permanent housing,” she said. It’s not “the destination for its residents. It’s a milestone on the way to a safe, stable home of their own.

“I’m so thrilled that St. Johns Village is here to give our neighbors respite from surviving outside now, and also the services and stability they need to build a path forward.”