Joint Office supply center works with dozens of groups to distribute nearly 56,000 bottles of water through worst of heatwave, reaching across Multnomah County

Trucks pull up early with pallets of bottled water, met by staff and volunteers who then rush out to unload and bring the water inside. Soon after, cars, vans and trucks driven by contracted outreach organizations as well as community organizations and neighbors replace the delivery vehicles.

The same staff and volunteers rush out to help fill them with the same water bottles, and other supplies — leaving some cars so heavy and full that their suspensions are notably strained as they pull away.

Working with the Joint Office, which has mapped the County into zones to ensure full coverage, outreach workers and volunteers will take those supplies to places like Delta Park, downtown Portland, Sellwood-Moreland and Gresham, and all points between and some beyond.

That work is part of the Joint Office’s ongoing mission to provide street outreach supplies — and support outreach providers and community groups across the county — all year long and especially during emergencies. Appointments to pick up supplies are still available through JOHSSupplies@multco.us.

Water at the JOHS' supply center awaits pickup by outreach teams on Friday, June 25.
In all, since Thursday, June 24, outreach teams have picked up nearly 56,000 bottles of water, along with 2,520 gallon-size jugs, to share with people outside during the heatwave that has been particularly dangerous to community members surviving outside.

Outreach teams also picked up, among other supplies, 32,000 electrolyte packets and 14,000 cooling towels (absorbent towels you wet and wrap around your neck).

“It means a lot for us to play this role in partnership with the providers. This last week has been very challenging. But we all work together as a team,” says Richard Gilliam, one of the JOHS coordinators at the site.

“This center plays a very, very important role in giving the folks out there on the front lines not just a place to get resources. It’s also a chance to say, ‘Hey, we appreciate what you’re doing.’” 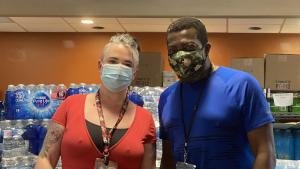 Carol Bethard and Richard Gilliam, coordinators for the JOHS outreach supply center, on Monday, June 28, 2021.
Dozens of groups have been helping, from outreach providers funded directly by the Joint Office, like Cascadia Behavioral Healthcare, Janus Youth Programs and Transition Projects, to community partners and other groups, including Potluck in the Park, Oregon Harbor of Hope and the Chapman Elementary School PTA.

On Saturday, June 26, 48 groups came by the supply center. That grew to 57 groups on Sunday, followed by 53 on Monday. Angel Stech, Chapman PTA president, said she heard about the supply center and decided to come by Saturday to load up for the weekend.

“I thought it was important for our community to be supportive during these hot days,” she said.

“I wanted to say thank you for all the work you did over these last few days of severe weather. The supplies you had available allowed me to be out there giving folks much needed support,” Holly Daly, with Janus Youth, said in an email to the Joint Office on Tuesday, June 29. “The folks I engaged with while outreaching were super grateful for the water and supplies! The spray bottles, Gatorade and cooling towels I found to be the biggest hit with people aside from the water itself. You are SO VERY APPRECIATED!!!”

“We’re the opportunity for providers to put a face to the Joint Office and we can connect them to other services, and they can see that the Joint Office is not just a government agency and that we’re a part of the community,” says Carol Bethard, the supply center’s other coordinator. “It’s not just physical work. It’s also mental and emotional work, and we get to be there for them through that.”

Before the heatwave, the site was already busy. Separate from heat-related visits, the center logged 365 appointments for June. And things got even busier over the past few weeks as the brutal forecast loomed.

Celeste Duvall, the Joint Office’s outreach and emergency response coordinator, said she started picking up some supplies back in April, knowing every summer is tough.

But she dramatically ramped up work to order pallets of water two weeks ago, pulling on every source she could find. She had to do it, she says, before everyone else got in line and made water too scarce to procure in bulk.

Loading up water for a volunteer on Friday, June 25, 2021, outside the JOHS supply center.
And she’s been on the phone ever since, making sure not only that water remains in ample supply, but also that outreach teams continue to get to all the places they’re needed. When calls came in about someone in distress in the Lloyd District area on Sunday, Duvall was on the phone to Cascadia within seconds, making sure they could swing by and check on them.

“I can’t say enough how much we appreciate each and every one of the teams and volunteers who are putting themselves out there. It’s amazing how much they’ve done. They are saving lives now and always,” she said. “There’s been nothing like this heat. We all want to do our part so we can all help our neighbors with nowhere else to go.”