Kenton Women's Village: ‘This is a great reminder of what we can do when we all work together’

June 9, 2017
The sleeping pods that make up part of the Kenton Women's Village project. (Photo courtesy of Catholic Charities, 2017)
Early Friday, volunteers hustled to add the finishing touches to Kenton Women’s Village, a pilot project in North Portland meant to provide at least 14 women experiencing homelessness with safe, private places to sleep and a meaningful chance to regain permanent housing.

The workers arranged landscaping. They placed baskets with essentials in each of the Portland-funky, community-designed pods the women will occupy. Solar-activated lights and outlets, to charge phones, still awaited installation.

The rush was on because of a looming deadline.

On Saturday, the women staying in the village will all be moved in and ready to start building their self-governing community – the first such village created in partnership with the City of Portland and Multnomah County. And they’ll begin their close work with staff at Catholic Charities, who will join the women on the site and provide services including one-on-one case management, employment assistance and health care.

But in the midst of Friday’s preparations, officials, neighbors and community partners paused to mark the imminent opening – and celebrate the collaboration that led to this moment.

“If we’re going to succeed, it’s because we’ve brought together new people, new ideas and new energy, and there’s a lot of that here today,” said Multnomah County Chair Deborah Kafoury. The City/County Joint Office of Homeless Services is supporting Catholic Charities’ work with the village.

Crucial groundwork included months of outreach with the Kenton Neighborhood Association, whose members voted 178-75 to welcome the facility this spring.

“We had to decide if this was ultimately something we wanted in our back yard. The answer was that we did,” said Tyler Roppe, the neighborhood association’s board president, who said interest from neighbors has been “enthusiastic” and “overwhelming.”

“Thank you to everyone who made this possible,” Kafoury added, “and thank you Kenton for saying ’yes in my backyard.’” 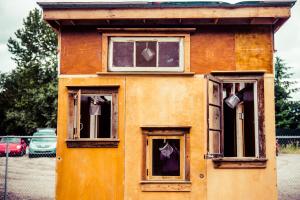 One of the pods at the Kenton Women's Village project. (Photo courtesy of Catholic Charities, 2017)

The City of Portland’s Office of Management and Finance invested in developing the village’s site, including financial support for the pods and funding the construction of the innovative kitchen and shower facilities, installed in custom shipping containers. Prosper Portland, the city’s urban renewal agency, is leasing the site for free.

Though this site will be available just for a year, making way for an affordable-housing development by Transition Projects, the kitchen, showers and pods can all be moved to a new site as needed.

The pods themselves were designed and built as part of Partners on Dwelling (POD) Initiative, an effort to unite architects, housing advocates and people experiencing homelessness. Architectural firms included Horst, SERA and LRS. 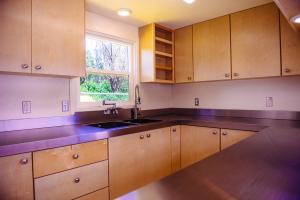 Inside the kitchen at the Kenton Women's Village project. (Photo courtesy of Catholic Charities, 2017)
That work was shepherded by Portland State University’s Center for Public Interest Design and the Village Coalition, a group that helps organize people in Portland’s other village-style sites: Hazelnut Grove (Overlook), Right 2 Dream Too (Rose Quarter) and Dignity Village (near the Portland Airport).

The Village Coalition worked with partners such as City Repair and the ReBuilding Center to find volunteer labor to assemble and prepare the site. The site will include a community garden and common spaces designed to bring residents together.

The group also advocated for the village’s self-governance model, a way to empower the women as they work with Catholic Charities on their housing plans. Catholic Charities’ on-site village manager will work with the women – who range in age from their 20s to their 60s and have been drawn from Kenton or North Portland – as they create village rules on community activities such as cooking and cleaning schedules.

Michael Cox, communications director for Mayor Ted Wheeler, praised the effort for its ability to unlock imagination and participation, and to harness “the power of community” and provide a model that can “carry forward to future successes.”

Richard Birkel, Catholic Charities’ executive director, said the project embraces a “housing first” approach to service. But he also said it’s something more, almost “an expanded definition of what transitional housing can be.”

The village adds to services by partners in A Home For Everyone, the region’s community-wide initiative for ending cycles of homelessness. Last budget year, partners provided shelter for nearly 7,000 people, a new record. But they also provided permanent housing for more than 4,600, which also was a record.

“I can’t tell you how many people ask me, ‘When is the Kenton Village going to open?’” Kafoury said. “Now it’s here, and I think this is a great reminder of what we can do when we all work together.”