Moderate reductions to wood smoke emissions will save lives, experts say; Board commits to act

The Board of Commissioners on Thursday passed a resolution that sets stricter goals for reducing wood smoke — a leading contributor to air pollution in Multnomah County — and commits the County to easing the burden of pollution on communities of color.

The resolution puts Multnomah County, which has Oregon’s dirtiest air, in line with international benchmarks that are less than half what the federal government currently requires.

Fred with his mother Sandy. Fred died of an asthma attack at age 25, leaving behind a son and his partner, who was pregnant with their second child.

Even though other sources, such as fossil fuels and industry, drive much of the County’s pollution levels, residential wood burning is a surprising and significant factor. Wood burning is the primary source of human-caused particulate matter and the leading source of what are known as polycyclic aromatic hydrocarbons, a group of cancer-causing air pollutants that harm everyone, but especially people with chronic health conditions such as asthma.

But data also suggests even small changes can have a big impact on community health.

“There are startling statistics that show that when we reduce particulate matter, we save lives,” he said.

Reducing particulate matter by just 5% would prevent 13 deaths each year in Multnomah County according to an analysis of environmental health data maintained by the federal Centers for Disease Control and Prevention. Reducing levels by 25% would prevent 63 deaths.

“This resolution affirms the basic, incontrovertible principle that everyone, everywhere, deserves to breathe clean air, all the time,” said Commissioner Susheela Jayapal.

Thursday’s resolution aligns emission benchmarks with those set by the World Health Organization.

Tori Heroux, an air quality planner with the Oregon Department of Environmental Quality, applauded the County’s proposal to set a lower benchmark for emissions.

“Study after study reinforces our concerns about the health impacts from wood burning,” she said, pointing to research from Harvard University’s School of Public Health that showed increased risks of death from fine particulate matter at levels below the United States’ standard, especially for older adults.

Because they are often disproportionately exposed to that pollution, people who are Black, Indigenous, or from other communities of color can face higher rates of illness and death.

An analysis from the Oregon Department of Environmental Quality shows that areas with the largest minority populations are exposed to residential wood emissions at greater levels than average, with Latinx people experiencing the highest impacts from emissions.

“Taking action on wood smoke pollution is therefore something this Board is called on to do by our recognition of racism as a public health issue, and by our commitment to eliminating health inequities,” Commissioner Jayapal said.

Death and the economy

Dr. Erika Moseson, a pulmonologist at Legacy Emanuel, said medical experts also support lowering emission standards below those established by the EPA and creating what’s called a change-out grant program to help the community get there.

Moseson narrated the dramatic trajectory of what happens to patients with respiratory conditions, such as asthma or chronic obstructive pulmonary disease, when they need treatment because of exposure to wood smoke.

Tiny carcinogenic particles in the smoke not only penetrate deep into the lungs, but they also slide their way through the thin membrane that separates the lungs from the rest of the body. Once they escapes the lungs, those cancer-causing particles invade every organ. They cause premature births and stunted growth, damage brain function, and cause lung disease and heart attacks.

At least 6% of Oregonians already have chronic obstructive pulmonary disease, and about 10% have asthma. When those individuals or anyone else with a respiratory condition are exposed to pollutants, they struggle to breathe.

“When you can’t breathe, you can’t work, you can’t go to school. When you miss school, you’re likely to fall behind academically and economically,” Moseson said. “You can end up with a catastrophic downward spiral for someone’s individual health as well as the family economy.” 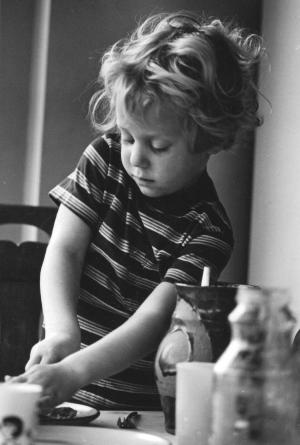 Fred started have asthma attacks as a child. They only got worse.

Her patients miss school and work. For people without paid sick leave, that also means giving up wages. Medical bills stack up. And when they can’t afford those costs, they fall to the taxpayers.

“It’s not just a drain on the individual health of these communities,” she said. “It’s actually a big drag on our economy as well.

“Anything we can do is worth the effort. It will pay off. Whatever dollars we invest in clear air will have a beautiful magnifying effect on our health and economic productivity, both for the individual and the entire community.”

Years ago, that catastrophic downward spiral took the life of one young man. Fred was a father with another child on the way. At age 25, after worsening bouts of asthma, he died during an asthma attack on his way to the hospital.

His mother, Sandy Polishuk, asked the Board on Thursday to take swift action — action that is nearly 30 years too late for Fred, who died in 1993.

Fred was tender, sweet, so thoughtful, she recalled.

“He’s what people call an old soul,” she said after the Board’s vote Thursday. During a birthday party when he was a child, she found him upstairs, engaged in deep philosophical discussion with an adult guest.

By the time he was 25, Fred had a boy of his own. They played together, down on the floor, vrooming with cars. Fred and his partner had been together since high school and they were expecting their second child.

But Fred had also suffered from asthma since he was young. And the trips to the hospital were becoming more frequent. He was worried about the cycle of steroid use.

Shortly after Thanksgiving in 1993, Fred called his mom. His asthma was flaring, and he asked if she could take his little boy, so he could rest. Sandy did; About an hour later, Fred’s partner returned home to find him worse and insisted they go to the hospital.

Fred died on the way.

All these years later, the pain is still profound, Sandy told the Board on Thursday.

“I don’t tell you this story because I think our family’s tragedy is unique or more tragic than other families’ losses, but because it is not unique,” she said. “There is no good excuse for not doing everything we can to reduce wood smoke pollution in Portland.”

Deborah Kafoury, who is serving her final year as County Chair, reflected Thursday on the steps her office has taken to improve air quality.

It was nearly five years ago that she helped organize a rally outside the state Department of Environmental Quality, in support of Cleaner Air Oregon, an industrial air toxics regulatory program that went on to become law, “in large part because communities showed up and spoke up,” she said Thursday.

Since then, the County has implemented Clean Air Construction Standards to limit pollution from diesel construction equipment, advocated for laws to phase out older polluting diesel trucks, and adopted rules that will accelerate the Country's transition to all-electric trucks.

In 2018 Commissioners affirmed the County’s commitment to environmental justice and passed a seasonal wood burning ordinance to limit or ban wood burning on the days when air quality is at its worst. In the past four seasons, Environmental Health has called 110 voluntary burn curtailments and just four mandatory bans.

Last year the Board declared racism a public health crisis and a root cause of inequities impacting the lives of Black, Indigenous, and all People of Color. Commissioners Jayapal and Jessica Vega Pederson later convened a work group to develop policy proposals for further curbing wood smoke pollution.

Earlier this week Environmental Health briefed the Board on those recommendations, which include changes to the existing wood smoke curtailment program, policies addressing wood as a heat source, and efforts to educate people about the harmful effects of wood smoke.

“It feels both right and necessary to formalize our values and our commitment to clean air that drove each of those actions,” Chair Kafoury said, noting Thursday’s resolution on wood-burning emissions “holds the County accountable not just because we say we want to achieve clean air, but also because we know achieving clean air is possible, especially if we keep working together.”

Next week the Board will consider additional steps. A new ordinance would extend the existing curtailment program from seasonal to year-round, eliminate automatic exemptions for EPA-certified stoves, and omit references to “Green” days — those days when the County sets no limitation on burning.

Mary Peveto with Neighbors for Clean Air thanks Chair Kafoury for her leadership.

Mary Peveto, executive director of Neighbors for Clean Air and a longtime partner with the County in air quality action, said Multnomah County has driven the state’s policies on clean air.

“Everything we have accomplished in the last 10 years has been in no small part, if not completely, because of the partnership with the county Board of Commissioners,” she said. “The leadership that you are taking, the strong and unflinching focus on public health risks, has also made a really profound impact on how the state regulates air.”

Peveto said the County’s work has provided advocates with the credibility they need to help policymakers understand and regulate air quality. And she credited Chair Kafoury’s leadership and commitment, in particular, for advocates’ progress controlling emissions.

“This might be the last chance to have the honor to sit before you,” Peveto said to Kafoury.

“I want to thank you. Whether it’s clean air, whether it's the pandemic, the plight of those experiencing homelessness and other disparities, I’m grateful to your legacy and what you are leaving this County.”