Later this month, Multnomah County and the City of Portland’s Joint Office of Homeless Services, working alongside Transition Projects, Inc., will open a 24-hour shelter in Multnomah County’s Hansen Building, formerly the location of the Sheriff’s Office.

“The public expects government to work together to find solutions, to rise above excuses and jurisdictional barriers,” Chair Kafoury said.

Mayor Hales echoed her sentiments. “This is a validation of the priority that the city and the county has placed on housing and homelessness over the last year,” he said, noting multiple efforts on behalf of both municipalities to establish affordable housing for every Portland and Multnomah County resident. 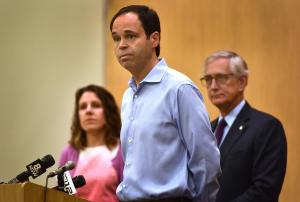 For the city and the county, this is an important step fueled by partnership. Last week, the two municipalities joined efforts to create the Joint Office of Homeless Services, a unified front aimed at providing safe and stable housing for all residents.

The Hansen Building will primarily house women, couples and men over 55. Also, veterans will receive preference. The move to open the Hansen Shelter comes as the Peace Shelter, located in downtown Portland, is set to close its doors on July 22. Another focus, Devendorf said, is to provide shelter for people in the immediate area.

“We know that there are hundreds of individuals living in East County that are experiencing homelessness… we are also going to do our best to accommodate those in the surrounding areas,” Devendorf said.

Chair Kafoury described the building as an “underutilized space” in a central location, a mere five blocks from the 122nd Avenue TriMet MAX station. Most of the Sheriff’s Office staff is set to move out of the building by July 15 in anticipation of the end of July move-in date.

The shelter will cost an estimated $1.3 million annually with a staff of roughly a dozen people providing services, including access to housing, health and income resources, as well as referrals.

Those in need of housing can access the shelter by reservation only, either by visiting the Day Center, located on 650 N.W. Irving St., or calling 503-280-4700. Once a reservation is set, it is kept until no longer needed.

While the Hansen Shelter is a major stride toward reducing the number of people on the streets, Mayor Hales said that it’s just the beginning. The “housing first philosophy” shared by Multnomah County and the City of Portland drives efforts to prioritize affordable housing over temporary shelters. 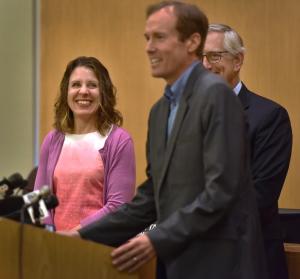 With this idea, the city and county have budgeted millions of dollars to provide safe and permanent housing for those experiencing homelessness.

“We have moved one step closer in meeting our goal to find 650 new shelter beds this year,” Chair Kafoury said. “With these new beds, we will be able to meet the needs of some of our most vulnerable residents.”

For those interested in the logistics of the new shelter, there is a community meeting on Thursday, July 7 from 6:30 p.m. to 8 p.m. at the Hansen Building, located at 12240 N.E. Glisan St.