Multnomah County’s Board of Commissioners has approved a transfer of the county’s section of NW Cornelius Pass Road to the Oregon Department of Transportation (ODOT). ODOT is expected to take jurisdiction for the section of the road that extends from Highway 30 to Highway 26 by March 2021.

The transfer was mandated by the Oregon Legislature as part of House Bill 2017 that was passed in 2017 and signed into law by Governor Brown.  Transfer of the road was included in the larger transportation funding bill by area legislators who felt that ODOT was better positioned than Multnomah County to make major improvements to the road.  The next step in the transfer is a vote by the Oregon Transportation Commission, which is expected to take place in early 2021. 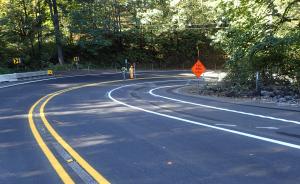 The section of the road in Washington County between Highway 26 and Multnomah County will also be transferred to ODOT.  The transferred section of road will be known as Oregon 127.

In recent years, traffic on the road has increased significantly. It is one of the few roads that connect Columbia and Multnomah counties with Washington County and carries significant truck traffic.  The five-mile section in rural Multnomah County is narrow, steep and winding and has a history of serious crashes.

ODOT requested that Multnomah County complete safety improvements to the road before the transfer.  The improvements were completed in October.

The road is named for Thomas Cornelius, an Oregon soldier and politician who built the road in the 19th century.  He settled in Washington County, where the town of Cornelius was named for him.

For more information on the transfer, visit ODOT’s website.