Multnomah County suspended operations at the Human Solutions Family Center on Wednesday night, in response to concerns that damage from a leaking roof might threaten the building’s safety and long-term viability.

The 110 people living in the shelter, at 16015 SE Stark, were moved to the Freedom Foursquare Church across the street. That space is often used for shelter during severe weather. Multnomah County’s emergency management department assisted the move by providing additional mats and blankets.

The County on Thursday worked with  shelter owner and operator Human Solutions to find motel rooms for the families, with the goal of keeping kids connected to their schools and parents connected to services until they can move into homes of their own. Wherever possible, families will move into permanent housing placements, as those become available.

Multnomah County Chair Deborah Kafoury decided  to suspend operations at the shelter after receiving an alert about ceiling damage, including collapsed sheetrock, from Human Solutions on Wednesday.

“I took immediate action, pulling together resources from across the County to make sure that the families had a safe place to stay last night,” Kafoury said. “We know this is a disruption for the families we serve. But their safety is our first concern.”

In light of the closure, Kafoury has ordered a general review of shelter facilities in the family system managed by the Joint Office of Homeless Services. That review will join ongoing planning around the next steps for the shelter system after two years of record capacity growth.

In addition, Human Solutions is currently assessing the physical condition of the Family Center to determine the scope of needed repairs to the roof and ceiling. This assessment will include a review of the building’s projected viability. 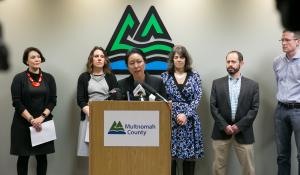 “This closure comes at a time that will afford us an opportunity to identify improvements to better align county services to serve these families in crisis and to look at other shelter models that may improve outcomes,” Stegmann said. “These shelters are a necessary stop for many working families on the road to self-sufficiency.”

Multnomah County’s Board of Commissioners unanimously agreed in October 2015 to help Human Solutions purchase and renovate the building, a former restaurant and strip club, as a temporary home for the county’s first year-round, 24-hour family shelter.

The county, through its Department of County Human Services, invested nearly $700,000, including a $300,000 loan toward Human Solutions’ down payment and nearly $400,000 for renovations.

The building, which opened in February 2016, was expected to operate as a shelter for roughly six years before making way for affordable housing.

“During my time at Multnomah County, we have expanded resources for families in crisis both through our investments in mental health services in our schools, our rent assistance, and through our rapid rehousing and family shelter programs,” Kafoury said. “All of these efforts are in place to ensure that families who face a big bill from the doctor -- a rent increase or another shock -- don’t wind up sleeping on our streets, but instead have the resources to overcome life’s challenges and get on their feet.”

In the 18 months since the Joint Office of Homeless Services was created, the investment in rent assistance, housing and shelter has doubled. The office and its partners served 30,000 people last year, through housing placement and retention programs, and shelter or eviction prevention services.

As the affordable housing crunch has continued to worsen, a predominant takeaway has been that there is a need for more investment in homeless services.

Kafoury said she will continue asking the Legislature to dedicate more resources to homeless families.

“That includes $5 million for shelters statewide,” Kafoury said. “Multnomah County is not alone, across Oregon homeless children and families are sleeping on the streets because of a lack of money. We know how to help these children, but we need more resources.”