New milestones in homelessness services: Record use of emergency shelter, housing placements ahead of pace 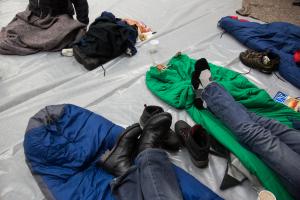 Inside the warming center at the Portland Building this winter. Severe weather meant our region's homelessness count moved from late January to late February.
Partners working with A Home for Everyone, our community-wide initiative to end homelessness in Multnomah County, served a record number of people in emergency shelter this year. The milestone is part of the payoff of last year’s dramatic expansion in capacity.

Through the first nine months of fiscal year 2017, which ends June 30, providers say they’ve helped 6,733 people, according to a new quarterly outcomes report released this week. That eclipses the 6,644 people served through all of fiscal year 2016, our community’s previous record.

In addition, housing placements are significantly ahead of last year’s pace through nine months. In all, providers helped place 3,535 people into housing between July 1, 2016 and March 31, 2016 – 338 more people than at the same point last year. Last year’s housing placement numbers also set a record at 4,603.

Download a copy of A Home for Everyone's third-quarter progress report or scroll to view the document below.

Both increases speak to the fallout from the ongoing housing crisis that is pushing people into homelessness and keeping them there. Rents and housing costs continue to outpace income for our most vulnerable neighbors.

The shelter surge reflects a commitment by the community to provide more shelter beds, so that hundreds more people who were on our streets can have a safe place to sleep while they get connected with services and housing.

Since January 2016, partners have roughly doubled the number of publicly funded year-round shelter beds, adding more than 600. The City and County have made shelters far more accessible to people who previously couldn’t or wouldn’t enter shelter. That includes couples, shift workers and pet owners. The community also added hundreds of severe weather beds this winter. 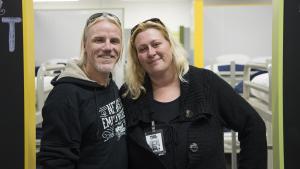 The Willamette Resource Center, an example of low-barrier shelter prioritized by A Home for Everyone, opened in fall 2016.
Those beds have filled up almost as soon as they’ve opened, showing expanded investments have made a difference for hundreds of people. While this year’s federally mandated “Point in Time” count showed an overall increase in those experiencing homelessness since 2015, the number of people able to access shelter and a safer night of sleep more than doubled.

“We are providing emergency shelter to more people than ever in our community, and that is important,” said Marc Jolin, director of A Home for Everyone and the City/County Joint Office of Homeless Services. “But if we want to reduce homelessness, and truly help people rebuild their lives, we have to continue to focus on increasing our prevention and permanent housing placement work.”

The City of Portland and Multnomah County have expanded their investments in those services. That includes increased rent assistance and stepped-up efforts to bring outreach workers into shelters and camps. The results of those investments show in the increasing pace, so far this year, in housing placements.

Prevention efforts also are tracking ahead of last year’s numbers. Total clients through the first nine months of the fiscal year are up by 192, from 4,101 last year to 4,293.

The data also shows A Home for Everyone’s progress in addressing racial disparities. Overall, a minimum of 66 percent of those receiving prevention assistance this fiscal year are people of color. Among people placed into housing, at least 63 percent are people of color.

Full numbers for fiscal year 2017 won’t be available until later this summer.

This year's count of people sleeping without shelter is down nearly 12 percent, including key reductions for populations whose numbers spiked in 2015: women, African Americans and veterans.

How Portland's soaring home costs and stagnant wages, are pushing working families out.