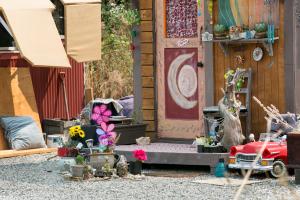 Inside the Kenton Women's Village, August 2018.
PORTLAND -- With federal funding finally in hand, a long-planned affordable housing development will break ground next February on land that’s been temporarily occupied by the Kenton Women’s Village.

The 72-unit development by Transition Projects is a win for our community that will add important housing options for lower-income adults at a time when rapidly increasing housing costs are pushing residents out of the area and increasingly onto the streets.

The project — by relying on modular construction techniques, and focusing on a co-housing model anchored by studio and SRO units — will serve as a model for adding similar cost-effective developments across the community. With rents as low as $294 a month, the development will serve neighbors making 0 to 50 percent of the median family income.

But the new development also means the Kenton Women’s Village alternative shelter pilot project must move from the site as soon as Feb. 1, 2019.

Because the 14-pod Village has been such a success — enjoying widespread community support while helping more than a dozen women leave the streets for permanent housing since June 2017 — the Joint Office of Homeless Services is committed to keeping it open in a new location.

Planning for the relocation has already begun, with a potential alternate site in Kenton already identified.

“To end homelessness in our community, we have to have shelter that provides a pathway to permanent housing, and the Kenton Women’s Village has proven to be that kind of shelter,” says Marc Jolin, director of the Joint Office of Homeless Services. “That’s why both of these projects are exciting. They’re helping us reach more people, and house them, than we otherwise might.”

The Joint Office’s partners in the Village, including Catholic Charities of Oregon and the City of Portland, are embracing the move as chance to enhance the Village, adding infrastructure, so it can serve as a proven and sustainable shelter option for years to come.

Upgrades in a new site could include improved sleeping pods, increased electrical service, and new sewer and water connections. Catholic Charities would continue to provide case management support to help women at the Village find stability and permanent housing.

The Joint Office is studying whether a City of Portland-owned site at North Argyle Way and Columbia Boulevard, just down the street from the current site, would be feasible.

If the move to a new site, either in Kenton or somewhere else, takes longer than the Feb. 1, 2019, deadline, the Joint Office will work with Catholic Charities to ensure that all of the women at the Village find permanent housing or temporary housing they can use until the move is completed.

“The new Kenton Women’s Village will be a true, high-quality alternative shelter model based on all that has been learned,” says Rick Birkel, executive director of Catholic Charities. “Combined with Transition Projects’ development, Kenton will be host to some of the most innovative homeless and affordable housing models in the country.”