As health officials in the Portland metro region work to halt an increase in HIV infections among people who use drugs, they have increased access to clean syringes, free condoms, and free tests for HIV and syphilis, a sexually transmitted disease also spreading among the same community.

Multnomah County Public Health also wants people to learn about a drug called pre-exposure prophylaxis — or PrEP — a once-a-day medication that dramatically lowers someone’s chance of getting HIV. The county is increasing promotion of PrEP for people who use meth or inject drugs, or have sex partners who do. 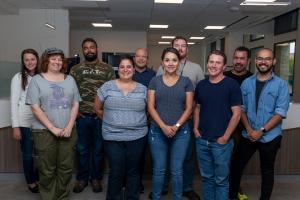 The staff at Multnomah County's STD Clinic want people to know about all the ways to prevent HIV.

The drug was first approved as a treatment for people with HIV and later expanded as prevention for people who are HIV-negative but who may be exposed to the virus.

People who inject drugs experience higher sexual and injection-related HIV risks. The Centers for Disease Control and Prevention recommend PrEP for anyone at risk of getting HIV, including people who inject drugs or trade sex for money or drugs. But PrEP has primarily been marketed to men who have sex with men, the group most heavily affected by HIV in the United States.

A 2017 report by the CDC on the behavior of men who have sex with men found 89 percent of HIV-negative people in the Portland metro area knew about PrEP; one-in-four had recently used it.

Among men who have sex with men, when taken every day, PrEP has been shown to offer nearly 100 percent protection against HIV. Among people who inject drugs, the protection rate is lower but still as much as 75 percent, if taken every day.

But most people in the Portland metro area who inject drugs simply don’t know anything about PrEP, according to data collected last year by researchers at Portland State University and the Oregon Health Authority. They found fewer than 15 percent of those without HIV knew about PrEP, and fewer than 1 percent had recently used it.

Officials want to change that.

“We need more options,” said Kim Toevs, director of Communicable and Sexually Transmitted diseases at Multnomah County. “If someone has HIV and gets successful treatment, which is called “undetectable”, they can’t transmit HIV to anyone else. And if someone doesn’t have it yet, they can use this medication and it will help. A lot.

HIV treatment has improved drastically from the early years of retroviral drug cocktails that caused serious side effects.

“People can live long and healthy lives with HIV, but managing a chronic disease is hard work. Whether it’s HIV or diabetes,” Toevs said. “We would rather people not have to manage these things.”

Many primary care providers prescribe PrEP. Public health officials are requesting clinics across the state to talk about PrEP to patients who report using meth or injecting drugs, trading sex for drugs or money, or who have sexual partners who use meth or inject drugs. Public health continues to ask clinics to prescribe PrEP to men who have sex with men and to anyone whose sex partner is living with HIV as well. 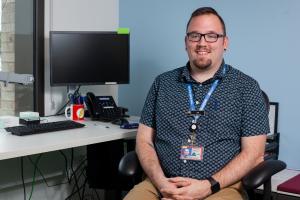 Tim Criswell, the insurance navigator at Multnomah County’s STD Clinic, helps make sure patients don't have to pay for PrEP

Providers at Multnomah County’s STD Clinic routinely prescribe PrEP to patients at risk of getting HIV. Anyone enrolled in the Oregon Health Plan can get PrEP without any out-of-pocket cost.

Anyone without insurance or with a private plan that might require out-of-pocket payment for PrEP can get help from Tim Criswell, the insurance navigator at Multnomah County’s STD Clinic.

Criswell helps enroll those patients in financial assistance plans so they won’t pay out of pocket for the prescription.

The problem with PrEP

But PrEP prescriptions present challenges beyond cost. To get a prescription, a person must meet with a provider, watch a video, visit a pharmacy, remember to take the medication every day, and return every three months for an HIV test and prescription refill.

In that way PrEP can be difficult for those who don’t have a safe place to store their possessions, a cell phone to receive daily medication reminders, or a calendar to mark the required medical checkups every three months, said Julie Lukesh, coordinator of the Multnomah County Harm Reduction Clinic.

“It’s a lot of schedule-following that can be really hard for someone in the chaotic stages of drug use. But the biggest barrier is not having a safe place to keep medication,” Lukesh said. 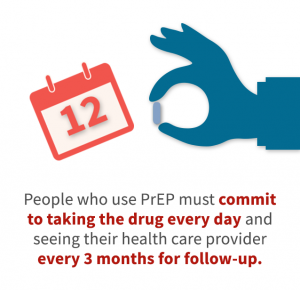 The clinic is designed to serve people who use and inject drugs. On Mondays and Thursdays, when the clinic is open, staff treat abscesses caused by injecting drugs, exchange used syringes for sterile ones, provide sexual health services and safer sex supplies, and enroll clients in the Oregon Health Plan.

“I would love to see more people interested in PrEP and help them with adherence,” Lukesh said. “It’s one more way for people to get connected or reintroduced to continuous care.”

People who inject drugs often avoid seeking medical care, even from emergency departments and safety net clinics, out of fear of being judged, according to a 2018 survey of people at risk of HIV in the Portland metro region. That might make individuals less likely to have learned about PrEP.

But among people who inject drugs, research suggests that those who get injection supplies from syringe exchange programs are twice as likely to have heard about PrEP than people who get syringes from other sources. And when people learn about PrEP, most are interested in taking it.

Outside In operates a primary care health center and offers a syringe exchange program in partnership with Multnomah County. Anyone who comes to Outside In’s exchange program for an HIV test learns about PrEP.

“We regularly talk to folks about PrEP and why it’s there. Most people have never heard of it,” said exchange coordinator Haven Wheelock. “We offer the very basics — there’s a medication that, if you test negative today, is effective at preventing transmission of HIV. It’s similar to birth control. That’s how we frame it.”

When someone is interested, the Outside In exchange team will refer that person to their health center, where every provider can prescribe PrEP.

Multnomah County’s mobile syringe exchange also talks about PrEP. But a leading barrier to clients accessing PrEP is the bias of medical providers who don’t know about PrEP or don’t want to serve people who inject drugs.

“It’s long overdue that we push PrEP to this population. We need to ask providers to really break down their bias and treat people who inject drugs like anyone else at risk of HIV,” said Erin Browne, coordinator of Multnomah County’s syringe exchange program. “That’s how we’re going to stem the spread of HIV.”

Officials encourage anyone who uses methamphetamine or injection drugs to get tested for HIV, STDs

Everyone has an HIV status. Get to know yours.

Multnomah County Health Department urges people who may have been exposed through sharing needles or sex with high-risk partners to get an HIV test.

Get checked and treated for sexually transmitted diseases, including an HIV test. Nonjudgmental and confidential.

Multnomah County is offering free HIV tests to anyone who uses meth in any form, injects drugs of any type, their sexual partners or men who have sex with men. Please print and distribute.