After the wettest spring in 81 years, high water has settled into stagnant pools across Multnomah County, creating a breeding ground for the largest mosquito outbreak since at least 2010. And the worst is yet to come.

“With the rain and the heat we’re headed into right now, we’re about halfway up that bell curve,” said ecologist Bek Sudia who leads a team that conducts mosquito surveillance and control for Multnomah County. “July is really our peak time.”

From their County offices on Columbia Boulevard, Sudia’s team travels the County to inspect breeding habitats and monitor for presence of mosquito-borne disease. Each year from May through September the team sets traps in 150 locations. The team has trapped well over 20,000 mosquitoes so far this year, about four times the total for all of 2021.

Check out these photos from Multonmah County Vector Control

Sudia takes those traps and, using a microscope and tweezers, divides mosquitoes into vials and sends 50-bug batches to OSU for testing.

And the need to limit West Nile and other diseases drives Multnomah County to control mosquito populations in three ways.

The program hands out bags of mosquitofish to control mosquito larvae in ornamental ponds. They disperse corn cobs covered in granules of Bacillus thuringiensis israelensis — a bacteria that kills mosquito larvae but is harmless to every other organism — in natural breeding grounds. And when populations spike, they work with property owners to fog focused areas using a chemical often used to treat household pets for fleas, but at one-tenth the concentration. They don’t fog agricultural, urban or residential land.

Multnomah County residents can get free mosquitofish to control mosquitos in ornamental pools and ponds.

West Nile Virus causes mild illness in most people, but in rare cases, it can be fatal. People who spend time outside around mosquitoes, especially in areas where the insects carry West Nile virus, should take steps to avoid being bitten.

The County’s Vector Control staff trap and test mosquitoes to look for dangerous diseases that could spread to humans and to minimize the species of mosquitoes that are capable of transmitting disease, said Emilio DeBess, the public health veterinarian for the Oregon Health Authority.

“A lot of people say there are no mosquitoes in Multnomah County,” he said. “That’s because Vector Control does an amazing job controlling mosquitoes.”

And now more than ever, monitoring mosquito species is vital to controlling the spread of diseases usually associated with travel.

“The introduction of new mosquitoes into the United States has the potential for transmitting malaria and many other conditions,” said DeBess. “Texas fights this issue every year with Dengue moving in. Florida has the same concern. We’re lucky not to have it at this point, but based on climate change, that could be a potential.”

That’s precisely what Salah Uddin Khan, a researcher at the National Microbiology Laboratory of the Public Health Agency of Canada, and his colleagues addressed in a 2020 journal article focused on global warming's effect on the distribution of two mosquito vectors of more than 20 viruses that infect humans.

They predicted the future geographic range of Aedes aegypti and Aedes albopictus based on shifts in global temperatures and precipitation, both crucial factors for these mosquitoes to establish a new niche, where they can survive and maintain a stable population.

Their research shows Multnomah County, like much of the temperate West Coast and all of the Southern U.S., will likely provide a stable home for one or the other of these species by 2050. 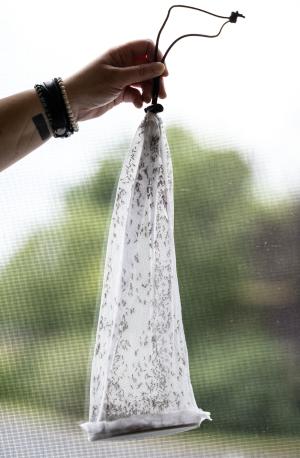 An overnight catch from one of 150 traps set across Multnomah County.

“Because temperatures are changing, what we expect to see is that during summer months you’ll see more of these two species. As we move into 2050, by my model, you would see a more stable population.”

And that could mean a mosquito who bites a person ill with a virus can transmit that virus to someone else.

Khan said that’s why travelers should be aware if they are visiting a country endemic to mosquito-borne disease and take care when they return home and feel ill. Talk to a doctor and make sure to share that travel history. Early detection and isolation can prevent community spread.

Why do mosquitoes like some people more than others? Find out who’s tastier and why.

How to prevent and control mosquitoes.

More about the techniques we use to control mosquitoes. Report dead birds.

Get free mosquitofish for your ornamental pond or pool, to help control mosquitoes. Available May 15-August 30.

How vector control specialists work to reduce mosquito populations in our area.