May 11, 2018
DeWanna Harris talks about the help she received from Transition Projects, not just with shelter, but with housing.

About 10 years ago, DeWanna Harris said, she left a life on the streets -- a life where domestic abuse and alcoholism had robbed her of her self-esteem, a life where she felt like she had no more hope.

She found Transition Projects, which offered her shelter and respite, and then helped her find housing and a path to a college education. Today, Harris is working on a master’s degree and runs the agency’s mentorship program, in which survivors with lived experience on the streets offer their help to others just coming inside.

And, in what she says is her greatest accomplishment, “I’m a parent. I’ve been a mom for 23 years. But today I can say I’m a parent.”

She credits the range of wraparound homelessness services, from shelter to housing placement to employment training, that have received record investments from Multnomah County and the City of Portland over the past three years.

Last fiscal year, the County and City’s Joint Office of Homeless Services, along with its partners in A Home for Everyone, helped nearly 5,000 people leave the streets for permanent homes, offered shelter for more than 8,500 and helped more than 6,000 never have to lose their homes in the first place. Each of those numbers set a record for the community.

“I’m a living testimony for what kinds of potential can be realized when you have access to the right services,” Harris says. “Thanks for your ongoing support and leadership in addressing homelessness in our community.”

Harris was one of nearly 50 people who spoke during the second of three public hearings on Multnomah County Chair Deborah Kafoury’s proposed $2 billion budget for the 2018-19 fiscal year.

The proposed budget calls for spending even more next year on housing, health and homelessness services -- from resources for renters to new syringe disposal boxes to new housing assistance for families to continued funding for programs that serve people of color, who face stark disparities in the criminal justice system, after they leave jail or prison.

The budget expands programs that provide outreach and legal consultation to immigrant and refugee families. It also proposes a health study to spotlight the needs of Pacific Islanders, one of the County’s fastest-growing communities.

But those investments would come with tradeoffs. Chair Kafoury’s proposed budget holds the line or makes trims in other areas to prepare for a growing gap in future years between county revenues and expenses.

Several speakers thanked commissioners for continuing to support social services programs with a track record of helping people on the edge rebuild their lives.

“I have a lot of gratitude about this program,” Roy Moore said of Central City Concern's Recovery Mentor Program.
“I was truly killing myself,” said Moore, among a handful of former clients who spoke to commissioners.

Then, after making his way to Hooper Detox one day, staff there connected him with the Mentor program. He went through counseling. He volunteered in the community and used job training services to find employment. Today, he’s working in the City’s Office of Youth Violence Prevention, doing street-level gang outreach.

“I have a lot of gratitude about this program,” he said. “I’m a father to my child. I’m a son to my father. I’m a friend to my friends. Without [the Mentor program], I wouldn’t have had this opportunity.”

Carolyn Preston said she was grateful for the County’s LEAD® project. LEAD®, or Law Enforcement Assisted Diversion, works to reduce disparities and reduce recidivism by redirecting low-level offenders involved in drug activity to intensive case management that’s tailored to the individual's needs, instead of a path that leads to prosecution and jail.

Preston said she relapsed last summer and found herself handcuffed downtown. But because LEAD® was available, she was able to receive treatment and find housing through Central City Concern.

“I’ve gotten back with my husband,” she said. “I’m looking forward to being a mentor to young women in domestic violence. That’s my goal, and today I’m clean and sober and still alive.”

Joy Jackson spoke about the help she received from the Community Alliance of Tenants’ renter hotline, funded in part by Multnomah County, after she faced a no-cause eviction. She said the renter hotline empowered her as she fought to stay in her home -- and that stability has helped her work for the tenant group, helping others like her.

One woman who called, Jackson said, “was in a place with rats, and she complained and complained.” Her landlord responded with a no-cause eviction. Jackson helped the woman by writing a letter, referring her to the Fair Housing Council of Oregon and working with her to get free legal services.

“She was able to stay in her home,” Jackson said. “Your support really helps protect tenants in all of Multnomah County.”

Members of the County’s Pacific Islander community turned out -- many wearing blue, in a show of solidarity -- to support new funding for work in the Health Department to gather and analyze qualitative and quantitative data on disparities and engagement opportunities in the Islander community.

Chair Kafoury met last fall with members of the Pacific Islander Coalition and included funding for the deeper study in her proposed budget this year.

Virginia Luka, a Palau native who was raised in Guam before moving to Portland six years ago for college, said preliminary data on the community from 2015 showed significant disparities in education outcomes, employment and prenatal care, among other subjects.

But many other subjects weren’t studied because data wasn’t available. For too long, she and others said, the community’s data was obscured by its inclusion in a larger “Asian” category.

Makerusa Porotesano, left, urged the board to fund a proposed health equity study within the County's Pacific Islander community.
Makerusa Porotesano, who joked about not getting the memo about wearing blue, and wearing red instead (“I guess I’ll be lava and bring the fire”), said he felt the sting of erasure as he grew up in North Portland. He was told to join programs for African Americans, because his hair was curly. Or programs for Latino folks, because his skin was brown.

“My upbringing in Portland, like in many immigrant communities, was very lonely and isolated,” he said.

It wasn’t until he moved to American Samoa and spent time living in other places, like the Marshall Islands, Fiji and Hawaii, that he felt supported by his community. He said that data collection could help change that -- and make things better for his daughter, who’s 4.

Do it, he said, “if not for my community now, then for my daughter later.”

Other advocates urged the board to deliver on a proposal that adds funding for immigration legal aid. The County began funding legal aid last year. The increased funding would come amid stricter and more capricious enforcement by federal immigration authorities under the Trump Administration.

Other advocates urged the board to deliver on a proposal that adds funding for immigration legal aid.

Last May, the Board again invested $100,000 to help with legal consultation over the current fiscal year. Those investments have served hundreds of people. For the coming fiscal year, Chair Kafoury’s budget would set aside $160,000 to increase case management support and address wait lists at partner agencies.

“It’s a crucial endeavor and we hope you can ensure this becomes a reality to counteract the harsh reality that immigrants face each and every day,” said Paloma Norris-York, a volunteer for Causa and the ACLU of Oregon who said she watched one day as ICE agents “swarmed” an American citizen at a courthouse just because he looked Latino.

“It’s the most tangible way the County can live up to its commitment to protect our immigrant families,” she said.

Concern over some proposed changes

But to make those new investments, while also preparing the budget for leaner years to come, commissioners will have to balance that spending against cuts in other programs. Two of those proposed cuts in particular raised concerns among those who spoke during the hearing.

Close to 10 people, including former County Commissioner Diane McKeel, urged the board to preserve funding for a jail-based sergeant position on the Multnomah County Sheriff’s Office’s anti-human-trafficking unit.

Some of the speakers had direct experience with sex traffickers, or told of friends who did. Others, including advocates, social workers and interns who worked with the unit, spoke about the impact of having an officer working directly in the jail.

Former County Commissioner Diane McKeel urges her former colleagues not to cut funding for a sergeant's post in the Sheriff's Office human trafficking team.
In jail, they said, the reach of pimps and traffickers is limited, creating space to gather intelligence for investigations and build relationships with women that can sustain them on the outside.

McKeel said human trafficking intersects with too many county priorities, from homelessness to youth services to equity.

“Eliminating the sergeant position would definitely hurt the system. But more important, it would hurt the victims of human trafficking,” she said. “At Multnomah County, we like to say we serve the most vulnerable. I cannot think of anyone more vulnerable than a child being bought and sold for sex.”

Others asked the board not to reduce funding for the youngest children served by Morrison Child and Family Services’ Counterpoint Outpatient program, which provides services for kids and families who experience inappropriate sexual behavior.

Kellee Beaudry, who worked at Counterpoint, warned that working with children who engage in inappropriate behavior while they’re young can help them from victimizing their peers.

“Early intervention means we can address behavior before there are more victims,” she said. 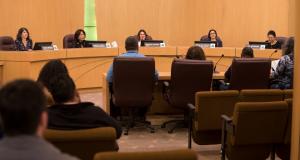 The Board of Commissioners will have a third budget hearing May 16, 2018.
Upcoming hearing and a final vote

Community members will have one more opportunity to speak to commissioners before a public vote May 31 to formally adopt the budget.

But Chair Kafoury also reminded those who spoke that neighbors who want to weigh in don’t have to wait to be heard by commissioners.

“Our phones, our emails, our staffs are always available to answer questions,” she said. “We really appreciate everyone who stayed to the bitter end. This was a great turnout.”

Two more hearings are scheduled before Board of Commissioners vote on May 31.

Three hearings scheduled for May 2, 9, 16 to get input from the public on community priorities