It was supposed to look like a home invasion robbery.

And when Susan Walters came home after her shift as an ER nurse at Providence Portland Medical Center, her attacker stepped out from behind her bedroom door with a hammer.

“We were nose to nose and I could feel his wet, winded breath on me,” Walters recalls of the struggle, more than 10 years ago.  “He was lying in wait for me, thinking ‘piece of cake, middle-aged woman, overweight with two bad knees.’”

Susan Walters was no piece of cake. The 61-year-old survivor emerged alive from the highly publicized 14-minute struggle that resulted in the death of her attacker, Edward Haffey, death and the conviction of her then-estranged husband, Michael Kuhnhausen Sr. 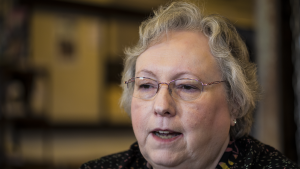 Walters was not only able to wrestle the hammer from Haffey, the man sent to kill her, as a highly-trained ER nurse with self-defense training, but she also subdued him with a chokehold in the hallway of her Southeast Portland home - then escaped.

That was nearly a decade ago.

Today, Walters is a motivational speaker. She provides self-defense expertise for Portland Police Bureau’s WomenStrength and GirlStrength programs, and she’s become a go-to expert on victims’ rights. That work is particularly important this week as communities nationwide come together for National Crime Victims’ Rights Week.

Walters will highlight the week by lending her voice at public events including a Multnomah County Crime Victims' Rights Week proclamation and by sharing her experience with the justice system for a unique Multnomah County project: a portal, or central online location, that offers critical information for crime victims.

“I felt like I was wrapped up in a quilt by having all of my friends and family and support systems,” Walters says of the aftermath of her ordeal, “but improving that journey for all victims is a victory. “

Unlike many crime victims, Walters’ knowledge of the legal system was strong.

She received help throughout the pretrial process from a victim’s advocate with the Multnomah County District Attorney’s Office. She signed up for VINE, a telephone service which provides alerts if an offender is released, transferred, escapes, or dies while behind bars.

And she got help through the Department of Community Justice’s Crime Victim Services Unit in preventing Kuhnhausen from returning to Multnomah County upon parole, while also working with the Oregon Crime Victims Law Center during the process. She knew her rights to be notified about release hearings and other legal proceedings.

Yet she still found herself re-explaining her needs as a victim to officials in the system and struggled with lack of a central location to get information.

“I’m fortunate that I had the level of support that I had,” Walters says now. “The family, the training, the intuition to make decisions. But I still had a lot of problems that I didn’t see coming. Victims need more time and assistance to make a security plan in advance of release. If I felt I needed to move my family out of the community, it would have taken several months of planning.”

“We ask a lot of victims, during a time of trauma,” explains Denise Pena, manager of the Department of Community Justice’s Crime Victim Services Unit. “And then we say, ‘Hey the trial’s done, make sure you register with the parole board, make sure you do this and that etc.’ And then it’s sort of forgotten.”

For the last two years, Pena and other public safety partners, including the Multnomah County District Attorney’s Office, the Board of Parole and Post-Prison Supervision, the National Crime Victims Law Institute and the Department of Corrections have been working to improve the victim's experience in the criminal justice system.

Last June, the county was awarded a fellowship through Code for America, a nonprofit organization that pairs teams of technologists with local governments to design digital services.

Since then, technologists have been working on a prototype for a victim’s portal they hope will help fill in the blanks, particularly during post-conviction.

“We’re looking at priorities,” says Tom Dooner, a Code for America software engineering fellow. “So If we give Susan a tool immediately after conviction, she won’t be blindsided by release, which is one of the most painful, anxiety-ridden moments in the process.”

Victims' privacy would be protected, and they would be allowed to identify what type of information they want to receive and modify their preferences throughout their experience with the justice system.

Similar concepts are being used in Minnesota and in Canada. But Multnomah County’s portal would be customized according to someone’s needs. Stakeholders such as Walters are providing feedback to help fine-tune the online instrument.

“We’re trying to make government services work a lot like your smart phone: easy to access, secure and user-friendly,” says Pam Dineva, a design fellow with Code for America.

“It would bridge all the different parts of the criminal justice system together into more of a continuum,” says Pena. “So as the offender moves through the criminal justice system - when he or she works with the DA’s office, the DA’s office light is on. And as the offender goes to prison, the Department of Corrections light is on.”

Multnomah County’s Department of Community Justice (DCJ), which oversees parole and probation in the county, has the largest crime victims unit of its kind in the state.

Department Director Scott Taylor says the county and its partners are contributing $225,000 to the project. Code for America will match the remaining 50 percent of funding needed.

“One of my top priorities as District Attorney has been to enhance services to victims of crime in our community,” said Multnomah County District Attorney Rod Underhill. “The project will make use of cutting-edge technology to keep victims informed as a case works its way through the system.”

Project team members hope to have a final product available by the fall.

“The system itself will have road signs to help navigate that journey. It’s painful and there’s no way anyone can make it pain-free, but by having the level of support, it makes it easier,” says Walters.

While fear of another attack has eased for Walters -- Kuhnhausen died in the Snake River Correctional Institution in Ontario roughly three months before he was scheduled to be released -- the trauma from the attack lingers.

“You can’t take back what happened, but you can make it better,” she says. “And you can’t do it without support.”