Talking about "Evicted": East county neighbors share stories from the front lines of our housing crisis

Every year, as part of its Everybody Reads program, the Multnomah County Library selects a book for community discussion that it hopes… everybody reads.

This year’s pick is “Evicted: Poverty and Profit in the American City,” an inside look at the housing struggles of several families in Milwaukee, Wisconsin. It was a fitting choice for a region gripped by a housing and homelessness crisis, where tenant rights are dominating politics from the Oregon Capitol to Portland City Hall to the Multnomah Building.

But at a book discussion Thursday, March 2, where a few dozen people at the East County Caring Community hashed through the book’s themes and shared personal stories, it was clear some people didn’t need to open it up to know what it said.

“A few people have opted out. Because it’s too real,” said Jenny Glass, executive director of East Portland’s Rosewood Initiative, referring to the families she works with at the community space on the Gresham-Portland border.

“That was something I didn’t think about when we started it. You could replace Milwaukee with Portland so easily. I have talked to people -- this week -- in their situations.”

“Evicted” tells the day-to-day stories of families struggling to pay rent with benefits checks and lower-wage work, spending half of their checks on housing that’s often unhealthy, crowded or at risk of being yanked away. They stand in for millions of others battling against entrenched poverty, systemic racism and downward eviction spirals that make it ever more difficult for families to find safety and stability.

In an interview shown before the discussion, “Evicted” author Matthew Desmond argued forcefully that housing should be treated as a right, not a commodity. Otherwise, he said, “everything else falls apart.” 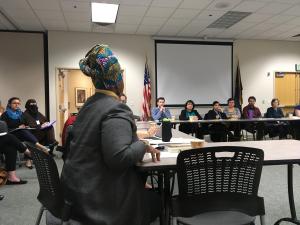 That message resonated later in the discussion for Multnomah County Commissioner Lori Stegmann, who represents outer east county, including Gresham. Alongside gentrification and displacement in inner Portland, thanks to rising rents and housing prices, some parts of east county have seen an influx of lower-income residents.

Beyond having to scrape by to pay ever-rising housing costs, other barriers to housing can include old debts, lingering issues with criminal records, medical or disability needs, and complicated family situations. Some families double up with friends or relatives, but even that can be risky if a lease limits how many people can stay in an apartment.

“Having a home and housing is the very foundation of humanity,” Stegmann said, noting her experiences as both an immigrant and an orphan. “He asks a valid question, and it’s a good place to start.”

In “Evicted,” Desmond offers universal housing vouchers as both an answer to housing instability and a weapon against poverty. Betty Dominguez, equity and policy director for Home Forward, the region’s housing authority, said having vouchers would be only the first step for a family hoping to leave poverty.

“We can’t provide food or money for the electricity bill or car insurance,” she said. “Many families continue to struggle” even after they’re placed in housing.

Even that’s shaping up to be more of a challenge for Home Forward this year, she said. Looming federal budget challenges are expected to limit the number of people the agency serves.

Fear of eviction can keep tenants from speaking up

Vanessa Chambers, a Gresham resident, said better tenant protections could make a difference. Sometimes, she said, people may not report problems such as not having heat. That’s because they fear being evicted and may not have any other options.

“This isn’t where you want to be, but this is the only place they’ll allow you to be,” Chambers said. “Sometimes the system just doesn’t care about you. The system isn’t designed to care about you.”

Outside Portland, Oregon landlords can issue eviction notices without giving a reason with just 30 days’ notice. In Portland, they must give 90 days’ notice

Lawmakers are currently debating whether to change state law on no-cause evictions. State law prohibits retaliation, but it’s difficult to prove. Advocates for tenants rights say some landlords use no-cause evictions to avoid inspections and save money by not performing required upkeep.

Glass, from the Rosewood Initiative, said other problems associated with financial hardship, like coming up short on a payment, hurt renters more than homeowners. Homeowners aren’t evicted the next month if they miss a mortgage payment, she said.

But “if you miss a rent payment,” she said before snapping her fingers, “there’s no time at all.”

Glass said some landlords, especially those who own large multifamily complexes and might be out of state, “do not care if they evict families. They do not care where those families go. They just care about the bottom line.” 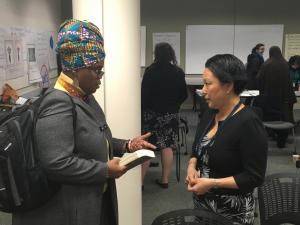 Debbie Clavon of Portland said people of color have long been familiar -- painfully so -- with the experiences described in  “Evicted.”

According to Portland’s latest State of Housing report, more than 70 percent of African American families are renting, compared to less than half of white families. Moreover, more than 52 percent of renter households overall were considered cost-burdened.

If a black person had written “Evicted,” Clavon said, instead of Desmond, who’s a white man, “I don’t think people would take it seriously.”

Roberta Hunte, senior policy adviser for Commissioner Stegmann, said our region’s struggles with eviction and housing instability are deeper than they might seem.

Families are “leaving before they get evicted, because they can’t afford the rent,” she said. “The problem is far greater than who gets evicted at the courthouse.”