The children of the Normandy Apartments pedal rusting bikes over rutted asphalt under an unseasonably hot spring sun. They circle around contractors’ trucks and skirt neighbors’ belongings piled outside a dumpster: mattresses, china plates, a computer monitor, a standing lamp without its shade, a green hula hoop.

In January, 18 families lived at the Normandy, an island of affordable rents in the increasingly expensive northeast Portland neighborhood of Cully. Then they learned their rents would double. And though many have yet to leave, work to prepare the complex for wealthier tenants has already begun.

Apartment doors have been pulled off their hinges. The rumble of power tools echoes in empty units. Workers spread river rocks around wispy clumps of grass and young shrubs.

In a corner unit above the din of construction, a 38-year-old mother named Adelfa stores a growing stack of cardboard moving boxes behind her living room couch. She cleans around them, around her husband’s painting supplies — a ladder and a five-gallon bucket of eggshell white paint. It’s part of her morning routine — cook breakfast, clean the house, then walk to Rigler Elementary, where her two youngest children attend school.

Adelfa, right, and her niece Fidelina, have been neighbors for a decade. Now they're moving miles apart to find affordable housing.

It’s been months since she’s volunteered regularly in the cafeteria. After all, looking for an apartment in one of the nation’s hottest rental markets takes time.

Her family of five has until June before they need to pack up the simple two-bedroom apartment on Killingsworth Street. Neighbors have already gone. Her niece, Fidelina, who lived below her, moved east of 82nd Avenue. So did her other niece, Yesica, who lived down the hall. And her close friend, Juana, who lived across the way.

And so, it seems, will Adelfa, her husband Jorge, and their three children.

As the families depart, Rigler’s Principal T.J. Fuller said his school stands to lose those 26 kids who attend classes at the elementary school. That is 5 percent of Rigler’s student body. Rigler is already on the cusp of losing federal funding for education and nutrition to serve the low-income kids who remain.

“Portland lost about 20 percent of students in poverty last year, which does not mean people pulled themselves out of poverty,” Fuller said. “It means they were pushed out of Portland metro.”

That also puts strain on youth and anti-poverty programs such as Multnomah County’s Schools Uniting Neighborhoods, or SUN, which offers a community hub where kids connect with after-class tutors, eat meals and join in extracurricular activities while parents volunteer, apply for rental, energy and food assistance, learn English or even work toward a GED.

“It’s is really about providing social and economic supports to families so the neighborhood is stabilized and so kids can stay in their schools and don’t have to relocate,” said Rose Bak, co-director of Multnomah County’s Department of County Human Services’ Youth and Family Services Division.

But that safety net is straining under the weight of a growing need.

Multnomah County has boosted spending in poverty and housing services as the federal government has divested in public housing. But county staff who serve low-income families say they still can’t keep up with demand. While Portland’s bullish economy paints a rosy picture of the region, pockets of Multnomah County are poorer than they were 10 or 20 years ago.

If East Portland were its own county, it would be poorer than any other in the state. It mirrors the economic profile of West Virginia, said economist Christian Kaylor, an economist with the state of Oregon who specializes in Multnomah County’s economy.

“The Portland-area is roughly one of the fastest growing for economic prosperity. The cruel irony is that in the shadow of that economic growth, we see crushing structural poverty,” Kaylor told the Multnomah County Board of Commissioners during a presentation on the local economy in January. And those in poverty, many of whom are people of color, are being pushed further from downtown Portland.

Oregon led the country in employment growth last year, with the bulk of those jobs in Portland. And Multnomah County is a top performer nationally for job and income growth, a combination driven by skilled workers moving to the county’s western Portland core.

But the middle class is being hollowed out. Those new jobs are increasingly offered at the far ends of the pay scale — high-wage jobs for skilled workers, and minimum-wage jobs for working people. Meanwhile the cost of living has far outpaced the rise in incomes, even for those with college degrees who have seen their wages rise in recent years. People without a college degree have seen no income change at all.

“You put a fire out somewhere and another pops up,” said Becky Bangs, senior policy analyst for the Youth and Family Services Division. “Even with Rigler and the Normandy, those are just the ones in the news, but it’s happening everywhere. Most apartments are having rent increases right now, sometimes of $200 or more a month. And while there are the big ones that hit the news, a lot of people are really struggling right now.”

In the early 2000s, four families competed for every available housing voucher, according to a 2002 report prepared by Portland State University. By 2016, that gap had grown to more than 1-in-5. The nonprofit housing agency gets up to 100 walk-in requests every day. Supervisor Patricia Schwartz says it can be so emotionally taxing that front-desk staff rotate during their shifts.

The Department of County Human Services launched a team to respond to immediate housing needs of families in crisis.

“The hardest thing for me is telling people over and over again that Home Forward is not accepting new applications,” she says. “When our lists aren’t open, we refer people to other resources, but we know the whole system is over capacity.”

In Portland, developers broke ground on 225 new residential rental projects between 2011 and 2015. Of those, just 13 percent received tax breaks for including affordable units in their complexes as few as 1-in-5 units was reserved for a household with a median income of less than $42,000, or 80 percent of the county's median income for a family of four.

Multnomah’s Department of County Human Services, and its partners in the Joint Office of Homeless Services, have tried to stem homelessness through a growing network of emergency shelters, rental and energy assistance programs, employment, food and other social services. 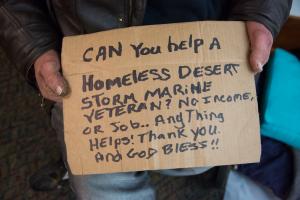 Multnomah County has raced to address the housing crisis that has pummeled West Coast communities. Last year, the City of Portland and Multnomah County nearly doubled their spending on homelessness services, from $22 million to $42 million. The county’s approved and city’s proposed budgets for 2018 would push that to $50 million.

Combining affordable housing resources with supportive services has demonstrated long-term success for individuals and families. That’s why last year, the county launched a Housing Stability team with access to flexible funds to help nearly 300 clients with emergency housing needs — covering everything from wheelchair ramps to emergency rent or mortgage assistance to repairing a leaky roof.

The county invests in anti-poverty services to keep people housed, and education programs, food, and energy assistance through the Schools Uniting Neighborhoods Service System. SUN Community Schools launched in 1999 at eight schools with investments from school districts, the City of Portland, and state funds. It later combined with other community programs to become an entire system of anti-poverty services. By 2017, it had expanded to 85 schools and community agencies, with a budget of about $18 million.

Local investments come as the county braces for major cuts in federal and state funding for anti-poverty and homeless services, and while 1-in-3 county residents can’t afford to meet their basic needs.

In Salem, lawmakers are considering a number of bills aimed at controlling the spikes in rents and shortage of apartments as well as reductions to core anti-poverty programs.

“When our market is constrained by high prices, low vacancies and speculative investment, it becomes a burden on hard-working Oregonians,” Multnomah County Chair Deborah Kafoury, wrote in a March letter to the Oregon Senate, in support of HB 2004, which would prohibit landlords from terminating month-to-month tenancy without cause, except with 90 days' written notice and payment of relocation expenses. “Today, we have a choice: continue to do what we’ve been doing — and hope that unseen market forces intervene before another mass eviction or 100-percent rent increase. Or we can do something about it.”

Any law that may pass this spring will come too late for the families at the Normandy, where all but a few tenants have signed agreements to move out by June 30, 2017. Renters had an option of staying if they agreed to pay double their previous rents.

But most preferred to leave, even though that means breaking up a network of family and friends who have lived within walking distance of one another for more than a decade.

Juana, a longtime friend of Adelfa, moved out last month. She’s renting a single bedroom for herself and her two kids in a house east of 100th Avenue and Sandy Boulevard. She now takes two buses to her night job at a McDonald's in North Portland. And because she doesn’t drive, her kids take a taxi to Rigler Elementary.

Adelfa and her husband Jorge, with Jorge Jr., the youngest of their three kids.

Adelfa’s childhood friend, Minerva, moved from the Normandy to a large apartment complex on Sandy Boulevard 20 blocks east of Juana. Minerva pays $1,300 for a month-to-month rental. Less than a week after moving in, she noticed her baby was covered with flea bites.

Adelfa’s niece, Fidelina, moved still further east, to a complex where she’s also paying month-to-month. There’s no playground, and not much grass for her 10-year-old daughter Daisy to play. She drives Daisy to Rigler each morning, but hasn’t sat her down to explain the reality: She probably won’t attend Rigler next fall.

Back at the Normandy, Adelfa hasn’t begun to pack her kitchen. The room is filled with comals, the griddles she uses to cook tortillas, blackened frying pans and a pair of 50-gallon tamale pots. The two bedrooms still hold the family’s toys and clothes. The patio is still crowded with children's bikes and a grill. In the living room, there are still the painting supplies, couches and a wooden replica of the manger where Jesus was born. Family portraits, rosaries and posters of angels hang on the walls, but she is holding off hanging a new large portrait of the children until they move.

Adelfa has reserved an apartment east of Cully in the same complex as her niece. But in the time she has begun packing and planning the family’s move, the rent at their next home has already gone up.

Uprooted: An extended family scatters across East Portland after a rent increase pushes them from an affordable apartment in Cully.

Who to call. Pay the rent. Homeless services. Affordable homes.