A Measles outbreak that began in the Vancouver, Wash. area has led to a risk of exposure for people in Northwest Oregon.

Clark County Public Health in Vancouver is leading an investigation into 14 confirmed cases of measles, a highly contagious disease, and three suspected cases. To follow their investigation, visit: https://www.clark.wa.gov/public-health/measles-investigation 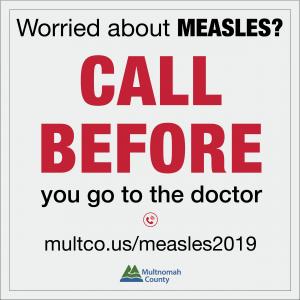 No cases have been among Oregon residents.

Officials ask anyone who might show symptoms of measles to call for medical advice before going to an emergency department, doctor’s office or urgent care office.

“Measles spreads so easily,” said Tri-County Health Officer Dr. Paul Lewis. “Someone could have come and gone from a waiting room, and a person coming in an hour later could still be exposed.’’

Health officers across the Portland Metro area are working with the Oregon Health Authority and their counterparts in Washington to reach people who might have been exposed to measles and who are unvaccinated. That’s because anyone is at risk if they haven’t received immunization for Measles, Mumps, Rubella.

“Most Oregonians have been vaccinated against measles and their risk is low,” said Paul Cieslak, MD, Medical Director for Communicable Diseases for the Oregon Health Authority Public Health Division. “Most measles cases in the U.S. result from international travel; the disease is brought into the US by unvaccinated people who get infected in other countries.”

As the number of measles infections grow, unvaccinated people are most at risk.

Find updates about where and when people in Oregon might have been exposed to measles.