Leslie Goodlow started speaking at the groundbreaking ceremony for one of the region’s newest affordable apartment buildings for families — and then pointed over her shoulder.

When she was a girl, she said, her father lived just a block away from the construction-torn lot at Northeast Tillamook and North Williams where partners in the project, including Multnomah County, had gathered.

In the years since, thousands of African Americans were cleared out by urban renewal and infrastructure projects that targeted their neighborhood at the expense of others. More recently, gentrification and economic development have continued to price people out.

“This, for me, is much more personal,” said Goodlow, business operations manager for the Portland Housing Bureau. “This is a job that has come from the heart, for me and many other people.”

North Williams Center is a public-private partnership developed by the West Coast nonprofit Bridge Housing. It will bring 61 apartments to a lot that had formerly been home to a County-contracted vocational training facility. Multnomah County commissioners voted to donate the lot for housing in January 2019.

Overall, 60 of the 61 apartments will be affordable for people earning no more than 60 percent of median income, or roughly $48,840 a year for a family of four. One more unit, for the project’s on-site manager, will be unregulated.

Crucially, two-thirds of the units — 40 — will be deeply affordable, set aside for households making no more than 30 percent of the area’s median income, or $24,420 for a family of four. Home Forward, the County’s public housing authority, is making those subsidies possible by committing federal Section 8 vouchers.

In addition, 10 of those deeply affordable units will come with ongoing wraparound support services, thanks to funding from the Joint Office of Homeless Services. Those services offer people leaving homelessness the extra supports they need to stay housed, from physical and mental health care, to addiction treatment.

“Including these homes for our most vulnerable community members in a mixed-income project is exactly what affordable housing should look like in 2019,” Chair Deborah Kafoury said. “And it is yet another example of what we can do together to resist the pressure of economic forces and the housing crisis…. We just need to keep doing more of it.”

The Board took its first steps toward the land donation back in 2015, after agreeing to team up on the opportunity with the Portland Housing Bureau. At the time, Portland leaders were working to invest urban renewal funding in North and Northeast Portland to reverse the displacement of African Americans and other longtime residents who were driven away.

With the County’s land, Portland could then offer funding for an affordable development that would help with its goal of addressing displacement. The building is one of six so far created through Portland’s 5-year-old, $70 million N/NE Neighborhood Housing Strategy. 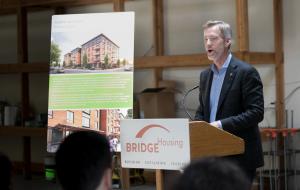 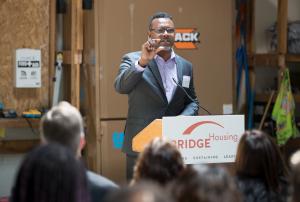 Dr. Steven Holt at the North Williams Center groundbreaking ceremony May 30, 2019.
“A true path forward cannot be built just on promises,” Mayor Ted Wheeler said. “Rather, it has to be built brick by brick, with results.”

In all, the development includes $20 million in public and private funding. In addition to Multnomah County and the city of Portland, partners include Oregon Housing and Community Services, Meyer Memorial Trust, US Bank, Metro, Prosper Portland, US Bank and Barings Multifamily Capital. Construction on the site is being led by Colas Construction, a prominent black-owned Portland firm.

Dr. Steven Holt, who chairs the Portland Housing Bureau’s community committee that oversees the N/NE housing strategy, also spoke about North Williams’ gentrification-fueled transformation since his family lived nearby in the 1960s.

“Projects like this make everyone better,” he said. “This isn’t just a good thing. It’s a necessary thing. It’s not enough to make promises. We have to perform on them.”