November 14, 2016
Formerly homeless couple Dominick Hart and Juliann Dunn at the opening of the Willamette Center

A new year-round shelter for couples and women will begin accepting guests on Wednesday.

The Willamette Center, in Sellwood at 5120 S.E. Milwaukie across from Oaks Bottom, will serve up to 120 people, including women and 45 couples. It is the largest couples shelter in the area and helps double the number of publicly funded shelter beds in the community.

Chair Deborah Kafoury said that historically, many women have remained homeless because they have a partner and there have been no couples shelters around.

“That meant in order to come inside, you’d have to break up your family,’’ Chair Kafoury said. “That’s just not right.’’

”We put the pedal to the metal and kept going,’’ said Quincy Attaway, superintendent for COLAS. 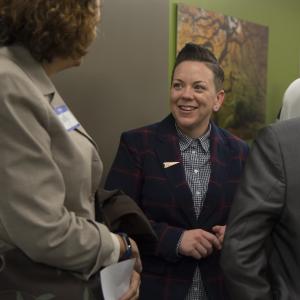 Stacy Borke of Transition Projects and Sally Erickson, left.
Transition Projects will manage the site through a reservation-only system. George Devendorf, executive director, said after a divisive election, completing the renovation and opening the shelter with so many partners and volunteers was an affirming and healing act.

Dozens of Sellwood neighbors toured the new kitchen, stocked with spices for cooking, dishes and cooking items from the former Veritable Quandary restaurant. The pots and bowls were included when the County purchased the iconic downtown restaurant to make way for the new Central Courthouse. 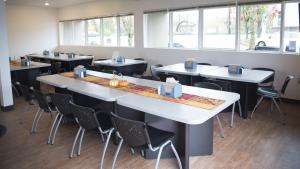 For Dominick Hart and Julianne Dunn, the opening was a chance to show how shelter could lead to permanent housing. The couple had been sleeping in downtown Portland doorways after losing their housing when she lost her job after becoming ill as a medical aid. They had been on the street even though Dominick has colon cancer.

They describe rock bottom as waking up one morning to find someone had thrown a bunch of used drug needles on them.

In despair, they wound up at the temporary Hansen Shelter where showers and clothing helped them stabilize and learn new life skills. Within a month of committing to their housing classes and working with a Transitions Projects housing placement specialist, they went to medical appointments, applied for disability and qualified for an apartment.

“I tell people on the street, you can do this, too,’ Julianne said.

“Because of TPI, I get to live,’’ Dominick told the roomful of housing specialists and neighbors. 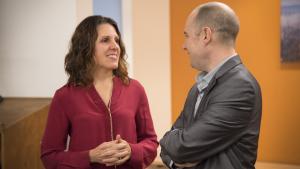 Chair Deborah Kafoury said as welcoming as the shelter is, the goal is for guests to achieve what Dominick and Julianne have.

But with a vacancy rate near zero, and nearly 2,000 people sleeping outside, offering this: “a safe place to be during the search for a permanent home is the right thing to do.’’