July 1: Protect yourself and your community by getting vaccinated and boosted for COVID-19. Public Health recommends wearing a mask indoors.

As Multnomah County awaits state approval to lift some restrictions on public life, Public Health leaders told the Board of Commissioners on Wednesday that they’re tracking an increase in hospitalizations related to COVID-19 and are also increasing access to testing for residents of color who, data shows, have not been tested for COVID-19 at the same rate as whites.

The County has met every requirement set out by the state and is close to meeting two additional requirements set by County leaders to meet the needs of underserved communities. The County submitted its proposal for reopening June 5 and hopes to begin lifting restrictions Friday, June 12.

But Public Health is closely watching a rise in severe illness and while also working to ensure equitable access to testing, leadership told the Board.

“I am going to speak to the question on everybody's minds which is, what’s going on with the spread of COVID-19 ahead of reopening?” Dr. Vines said Wednesday.

Hospitalizations have risen for two weeks in a row, from nine in the week ending May 17 to 14 in the final week in May. 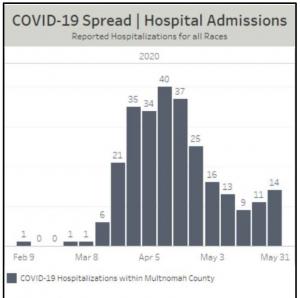 Hospitalizations are up, but numbers are small, as County prepares to enter Phase 1 reopening during COVID-19.

Hospitalizations have increased both overall and among communities of color. It is, to some extent, an expected outcome as the state and other counties have lifted restrictions, letting people increasingly mix. It's also the reason counties have beefed up contact tracing teams and access to testing, Vines said, to keep the disease “to sort of a slow burn, if you will.”

Vines said it’s too soon to tell whether protests over George Floyd’s killing by a Minneapolis police officer and the broader movement against racist systems and policies will cause those numbers to rise more sharply. Regardless of whether demonstrators do cause the numbers of COVID-19 cases to rise, Vines said, it’s the position of Public Health to support the movement.

“I fully support people speaking out against the egregious death of George Floyd and racism in all of its forms, and acknowledge that racism underlies not just COVID-19, but almost every other aspect of our lives,” Vines said. “And if this is the way to address it — people taking to the streets in face coverings, outdoors, and taking other precautions — from a public health standpoint, if this is the time to address racism, then by all means we need to do that.”

With a team of 65 contact tracers on the job, Multnomah County is able to reach out to every person who tests positive for COVID-19 and every close contact, said Communicable Disease Director Toevs.

“We feel confident that we have the capacity right now to adequately follow up on every case, and to do the contact notification with the staff that we have,” Toevs said.

Multnomah County has hired about half the staff it would need if a second, larger wave of COVID-19 sweeps through the community, and it’s working to finalize contracts and hire additional staff with specific language skills to round out the team.

Robust contact tracing coupled with broader access to testing are Public Health’s most powerful tools to slow the spread of COVID-19. But Toevs said her team has confirmed early suspicions that people of color, most significantly Latinx residents, have not, and still do not, have equitable access to testing for the disease. 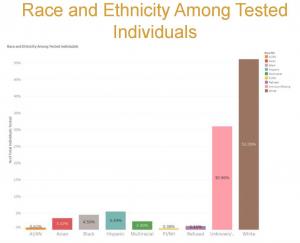 Latinx residents comprise about 12 percent of the County population, and 27 percent of cases  — but only 5.5 percent of County residents tested for the virus.

This could point to under testing and also to a disproportionate burden of disease. Latinx residents are employed at a higher rate in essential jobs that put them at higher risk.

National data also show that fewer Latinx residents can telecommute and that more Latinx residents report they risk losing their jobs if they don’t continue to show up in person. Latinx residents also report larger household sizes and are more likely to live with extended family and non-family members.

“We have quite a ways to go before we have equitable access,” Toevs said.

Multnomah County has taken measures, where it can, to increase access to low-barrier testing. Last week, the County opened drive-through testing at the East County Health Center and will soon add a site in mid-county. The free testing is generally reserved for symptomatic residents. No one will be turned away because of their immigration status or because they lack insurance coverage. Close contacts of those who test positive can also use those sites, even if they show no symptoms.

As Multnomah County prepares to lift restrictions on dine-in restaurants, salons and gyms, many protective recommendations will remain in place, said Public Health Director Banks. They include:

“The more places you go and people you see, the more important it is to maintain 6 feet and use face coverings,” Banks said. “Even if you’re not perfect, these measures will help.”

When residents do decide to mingle, go slow, Banks said. Visits held outdoors are lower risk than inside, especially when also maintaining 6 feet of distance. Start gathering with only a few people at a time, and continue to use precautions. Then slowly widen your social circle.

“While I know it's hard, we want to ensure people understand: The virus is out there, and we still have no vaccine,” she said. “The more people we connect with, and the more places we go, the more there’s a chance that the virus spreads.”

Commissioner Sharon Meieran asked why Public Health was not recommending a mandate of wearing face coverings in public.

“We have noticed cases are increasing. To some extent we expect that. We have seen protests and we’re doing what we can to help people while they’re engaged to be as safe as possible. We have to reopen at some point and that decision must be made balancing risks,” Meieran said. “What we need to be doing as we weigh those risks is to mitigate those risks. That brings me back to face coverings.”

“We need to acknowledge and to address those concerns,” Meieran said. And at the same time, she said, “We need to approach the issue from a population, evidence-based and community standpoint. I feel very strongly that we should get to a different place. So I plan to pursue Board action on this.”

Commissioner Lori Stegmann said she was deeply concerned about the proposal to mandate the use of face coverings. She wears one when she goes out, and she supports the science that shows they protect the wearer and those close by. But she doesn’t face the same risks as Black residents, she said.

“We also know that COVID and racism are killing Black Americans. We know that BIPOC folks have to make conscious decisions every day about how they show up in the world, and how they are perceived by other people. And most importantly right now, how they are perceived by the police,” Stegmann said. “We know that BIPOC people are less likely to be able to work from home, so therefore, they have to go out in the community. They don't have a choice.”

“I am not comfortable implementing a policy that will encourage police to stop black men from either wearing or not wearing a face cover,” she continued “We talk about equity, safety, and trust at the County, and we have a lot more work to do.”

Multnomah County submitted its Reopening Framework to the state of Oregon today to reopen much of public life and many businesses. If approved, the county will move to Phase 1 on Friday, June 12.