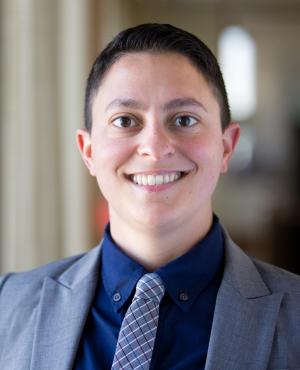 Dani Bernstein brings more than a decade of experience in advocacy, volunteer management and philanthropy to their role as Director of the Multnomah County Office of Community Involvement.

Dani was born and raised in Los Angeles and graduated from Pomona College with a B.A. in Sociology. Their career began working as field staff for marriage equality campaigns, organizing in California, New Jersey and Oregon to build strong volunteer bases to advocate for marriage equality and LGBTQ justice. While working as a field organizer, field manager and eventually statewide field director, they developed a passion for training, supporting and empowering volunteers to engage with their elected officials, get involved in politics and government, and advocate for social justice issues.

In 2010, Dani moved to Oregon permanently and started working for the Oregon Bus Project (now Next Up), a youth civic engagement nonprofit. During their two and a half years there, Dani directed a summer fellowship program for young leaders looking to launch their careers in public service, politics and advocacy.

Before joining Multnomah County, Dani served as the Acting Executive Director of the Equity Foundation, a local LGBTQ community foundation, where they managed granting and scholarship programs, oversaw all financial and office operations, and successfully negotiated and implemented a merger with a partner organization in LGBTQ philanthropy.

Outside of work, Dani lives in North Portland with their wife, Rachel, and dog, Asher, and enjoys running, cooking, exploring the Northwest's natural beauty, and volunteering for local social justice organizations.