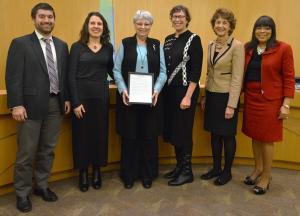 Sammuel Konadu phones his presentation in.
The Board of Commissioners proclaimed January 29, 2015, as Kathleen Todd Day for her work advancing public engagement in county decision-making over the past 19 years. She began working in the Office of Citizen Involvement (OCI) in 1996 and became its Executive Director in 2003. Kathleen led the office as the Multnomah County Citizen Involvement Committee (CIC) conducted annual programs such as the Citizen Budget Advisory Committees, Volunteer Awards Ceremony, and public budget forums. Additionally, under her watch the CIC initiated the Department Review program, Diversity Outreach Workshops, and the annual Education & Recruitment Campaign. All three initiatives were recognized by awards from the National Association of Counties. Kathleen is also a founding member of the county's Vital Aging Network (VAN) Employee Resource Group. In 2009, Kathleen was awarded the "Sy Award" by the CIC in recognition of her tireless work facilitating citizen and neighborhood involvement for more than 30 years at the city, county, and neighborhood levels. 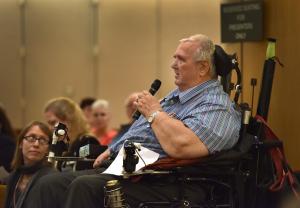 During the proclamation ceremony, county colleagues and advisory committee members spoke of what a great friend, listener, and adviser she has been, and also acknowledged her enthusiasm and commitment to public engagement. Knitting will be one part of Kathleen's "encore" career, along with continuing to help lead the county's Vital Aging Network Employee Resource Group.

Some quotes from the Proclamation ceremony: