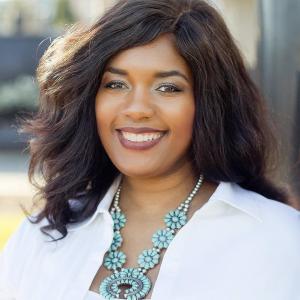 Preschool for All Director Leslee Barnes
Leslee Barnes remembers the historic night in November 2020 when residents voted overwhelmingly to support the Preschool for All initiative in Multnomah County. After months of lockdown, COVID-19 was now surging to record highs in the community. She was looking for hope wherever she could.

The lifelong early education and racial justice champion had seen the need for greater access to preschool for years and had volunteered on the campaign. After several tense hours, the outcome was clear: 64 percent of Multnomah County residents said yes to Measure 26-214. Voters agreed to establish tuition-free, universal preschool for 3- and 4-year-olds in Multnomah County through a tax on high-income earners.

“I remember watching the votes come in — when it happened, I was in tears that people still wanted to invest in it,” Barnes says. “I was shocked that this coalition was able to pull this off in the middle of this crisis. It was a really bright spot in a really hard year.”

Within days, people started urging Barnes to direct the program’s implementation. As a stakeholder in the Preschool for All initiative from the beginning, she had been deeply entrenched in the effort to get it to the ballot. Her early childhood expertise and leadership spanned decades. It only made sense for her to throw her hat in the ring, her friends kept telling her. For her, it seemed like a dream job.

On Thursday, March 4, that dream became reality: Multnomah County announced it had hired Barnes to lead Preschool for All. She will begin directing the Department of County Human Services’ Preschool & Early Learning Division in early April. Her charge: overseeing the program’s implementation from the ground up, scaling it from 500 to 1,000 preschool slots in 2022-23 to universal access by 2031.

“As a preschool provider, a small business owner, a woman of color, and a public employee, Leslee will be instrumental in leading the rollout of Preschool for All,” Commissioner Jessica Vega Pederson announced after Barnes’ hiring. “I’m excited to continue to work with Leslee to bring quality, universal, free preschool to our families.”

Barnes says she’s ready for the challenge — everything she has done in her career has led to this moment. As a mother of four, she knows firsthand how hard it is to find affordable, quality childcare. And as an early childhood entrepreneur and consultant, she understands the business of childcare. She aims to build a system that unites the needs of children, parents and providers.

“I’m humbled, overwhelmed and excited,” Barnes says. “Thinking about my career, pieces of the journey have brought me to this particular point. Part of me always hoped to see things come together like this. Now it’s happening. All these pieces of the puzzle are coming together to create a beautiful picture.”

A fourth-generation Oregonian who grew up in Northeast Portland, Barnes has deep roots. She attended Irvington Elementary, Harriet Tubman Middle School and then Grant High School. She went on to earn her bachelor’s degree from Warner Pacific University.

While Barnes would go on to build a career in early childhood education, her first job was as a nuclear chemical biological specialist for the United States Army. That was also when her first child was born. And her son was only 8 weeks old when she had to return to work.

Barnes says she never will forget her experience looking for childcare. She was giving up her child to someone else for the first time, and she had all sorts of questions: What type of qualifications would her provider have? Could she trust them? What type of activities were they going to offer?

Everything turned out well in the end, but the decision was daunting. And if it was hard for her, surely it would be hard for someone else.

“As a young mom, I didn’t know where to start,” she says. “I was looking for someone I could trust. We didn’t have Preschool for All back then, and I could have used some information to help me make my decision.”

In 1999, she founded Village Childcare LLC, a community-based childcare organization that provides early learning and childcare services in the Portland metro area. As a childcare provider, herself, she learned that childcare is more than a service — it’s a business, and both parents and providers have unique needs.

Over the course of her 20-year career, she’s drawn on her experience as a provider to support other educators and entrepreneurs. Barnes' leadership and work has also focused on racial justice and equity, including as the founding board chair of Black Child Development PDX.

Most recently, as a Spark improvement specialist for the State of Oregon, she helped early childhood programs launch a statewide program that raises the quality of child care. The program connects families to early learning and childcare providers and offers coaching, professional development, and resources to providers.

As a participant in the Preschool for All Task Force process, she also shaped the initiative that residents approved in November 2020. The coalition of parents, education experts, nonprofit directors, elected officials and business leaders met from September 2018 through July 2019. Under the leadership of Commissioner Vega Pederson, they created a vision for universal preschool in Multnomah County.

"Leslee's focus on racial equity, depth of early childhood experience, and commitment to meeting the needs of families, children and preschool providers all make her an amazing person for this role,” says Sadie Feibel, deputy director of programs at Latino Network and a member of the Preschool for All Task Force. “I've worked with Leslee for over two years on the Preschool for All effort and know that she will bring an innovative and inspiring approach to this work."

When Barnes first saw the director position open up for Preschool for All, she was hesitant to apply. But friends and family insisted she had the experience. When Barnes looked at the job description, she saw how her personal and professional background prepared her for the role. After a lengthy, competitive interview process, she got the news: She’d landed her dream job.

“My mom was overjoyed,” Barnes says. “If you would’ve told me back at the beginning of this journey, I never would’ve thought it. I know it’s going to be hard work, but it’s a good type of hard work.”

As someone with her feet in both worlds, Barnes says navigating the childcare system today is overwhelming for most and the burden is on parents’ backs. Not only do parents have to search for a provider on their own, but the costs are also astronomical. Oregon ranks among the most expensive states for preschool. And yet 60 percent of Multnomah County households with children younger than  5 fall below the Self-Sufficiency Standard, meaning they are unable to meet their basic needs without assistance.

Children from communities of color are disproportionately affected by poverty. Forty-one percent of children younger than 6 in Multnomah County are children of color. And 65 percent of children living in poverty are children of color. The COVID-19 crisis has only worsened those disparities. Preschool for All aims to reduce disparities by prioritizing families who have the least access to affordable, quality childcare today.

The workforce is also struggling. Early education workers are severely underpaid and overworked. Turnover is high, which leads to lower quality education. And workers aren’t getting the support they need to grow in the field. Under Preschool for All, wages for teachers and preschool assistants will dramatically increase.

“I have been in this field for over 20 years, and the attention to the design of (Preschool for All) is immense,” Barnes says. “I can’t really tell you how big this is, because you'll see preschool in all kinds of environments. We’re talking about paying teachers what they make in a school district. We hope to serve 11,000 children at the endgame, with a focus on racial equity.”

Barnes is already planning for Day One in her new role. She’s focused on putting together a team to lead the work. They will need to create a strategic plan. But soon, she says, families can expect to see kids learning and growing together.

The work will be hard. But as Barnes looks forward, she envisions a groundbreaking movement for early childhood education right in her own back yard.

“I see smiles,” she says. “Having children who feel supported, having childcare providers who love what they’re doing, parents who feel understood. I just hope that that’s what we see: joyful learning.”

Preschool for All will connect 3 and 4 year olds in Multnomah County to free, culturally responsive, inclusive preschool experiences.

Applying for a Preschool for All slot, List of Preschool Providers, Choosing a Provider, Family FAQs and more.