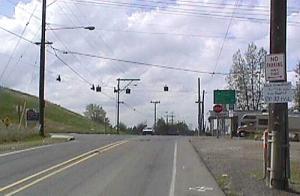 An intersection improvement project at NE 223rd Avenue and NE Sandy Blvd. in Fairview was completed in November 2008. Multnomah County contracted with Portland Excavating to build the project at a cost of roughly $840,000.

The project improved traffic flow and expanded capacity at an intersection that is serving increasing traffic volumes due to nearby development.  Together with an upcoming project that will widen NE 223rd to the south, the improvements will help meet growing traffic demand expected in the future. 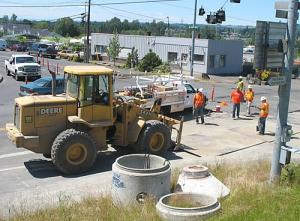 The contractor’s crew places a steel plate over a trench dug to carry a new stormwater line.

At the intersection the project:

Multnomah County maintains this intersection and 300 miles of roads and bridges.