Tanks at the CEI Hub along the Willamette River 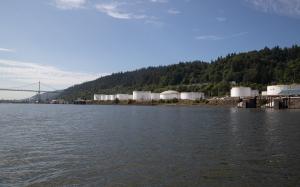 In 2020, Multnomah County Office of Sustainability and the City of Portland Bureau of Emergency Management commissioned a study of the Critical Energy Infrastructure Hub in Northwest Portland. The study is intended to characterize and quantify the anticipated damages from the CEI Hub in the event of the Cascadia Subduction Zone (CSZ) Earthquake.

The CEI Hub is a six-mile stretch of industrial development along the west shore of the Willamette River. More than 90% of all liquid fuel in Oregon is stored at facilities in the CEI Hub. This includes the gas and diesel supply for the Portland metro area, as well as all of the jet fuel for the Portland International Airport. Other hazardous materials are also stored at the CEI Hub. 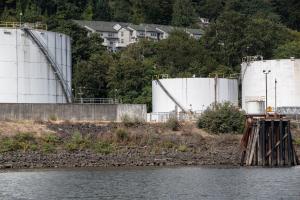 The CEI Hub — built before our current understanding of the region’s earthquake risk — sits on unstable soil subject to liquefaction and lateral spreading in an earthquake. The CEI Hub is built on soils that geologists anticipate will be subject to liquefaction (when the water table rises during an earthquake and loosens soils making those soils act more like a liquid than a solid) and lateral spreading (when the soils will spread toward the Willamette River). Because the CEI Hub is so close to the Willamette River and the dense urban core in the City of Portland, the risk of an accident, spill, or major infrastructure failure is particularly concerning as the region’s earthquake’s risks are now well-known and well-documented. There is an estimated 26% likelihood of a major seismic event in the next 50 years.

The study findings reinforce the public concerns about the facilities in the hub. 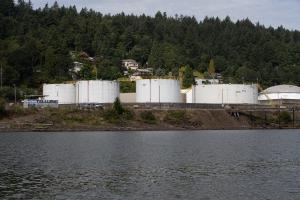 Multnomah County will be working with state and local partners to determine next steps to ensure that the facilities either upgrade their infrastructure to modern seismic standards or retain liability coverage to ensure the public can be made whole in case of a disaster.

While scientists have long forecast a magnitude-9 earthquake in Oregon’s future, this is the first analysis that identifies up to $2.6 billion in costs from the failure of 630 storage tanks.

The deadline to submit public comment is Sunday, August 15.

The Board of Commissioners on Thursday passed a resolution to oppose any new and expanded infrastructure for transporting or storing fossil fuels in Multnomah County.

Commissioners tackle earthquake risk to North Portland fuel tank hub, which pose one of the most significant hazards in the region in the event of a Cascadia Subduction Zone earthquake.