Climate is fueled by solar radiation.  When solar radiation reaches the earth, some of it is immediately deflected by the atmosphere, clouds, or the surface of the earth, but some of it is absorbed and re-emitted as infrared radiation, or heat. Incoming solar radiation is stronger at the equator than at the poles, and this discrepancy drives global atmospheric and oceanic circulation, which we interact with locally on a daily basis in the form of weather systems. Overall, the climate system is said to be in equilibrium. This means that the amount of solar radiation coming in through the atmosphere approximately equals the amount of heat being released from the earth.

Although the greenhouse effect is essential for life on earth, when atmospheric greenhouse gas concentrations increase, the resulting increase in the surface temperature of the earth can pose a threat to humans and other organisms.

Carbon dioxide comprises the majority of greenhouse gas emissions in the United States. Fossil fuels such as coal, gasoline, diesel, fuel oil and natural gas are made of carbon that has been stored underground for millions of years. Burning fossil fuels to generate electricity, manufacture goods, grow food, heat our homes, and power our vehicles transforms this stored carbon into the gas carbon dioxide and releases in into the atmosphere. Changing patterns of land use and land cover, primarily the burning and destroying of forests and the conversion of wildlands to farmland or housing, also release carbon dioxide from carbon stored in plant matter and soil. Such land use changes reduce the planet’s capacity to absorb carbon dioxide, by reducing the number of trees and plants that otherwise would remove carbon dioxide from the atmosphere through photosynthesis. As a result of these activities, global atmospheric concentrations of carbon dioxide have increased by more than 30 percent over the past 150 years. 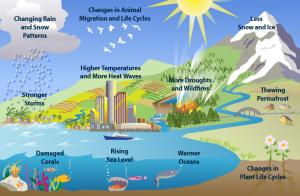 Albedo is a measure of how much solar radiation is reflected from a surface, rather than absorbed and re-emitted from it as heat. Ice and snow have very high albedo, they reflect most of the solar radiation that they come into contact with. Comparably, the ocean and paved surfaces like roads have very low albedo, most of the light that comes into contact with darker surfaces like these is absorbed and re-emitted as heat. In the ice-albedo feedback loop as ice melts, it exposes land or ocean that has a lower albedo than the ice. This causes warming, which melts more ice, and the cycle repeats, melting the ice and snow more and more each time. In the water vapor feedback loop, water vapor allows more heat to be held in the atmosphere. More warming evaporates more water, which leads to more warming, which evaporates more water. These and other feedback loops are of concern to climate scientists because it is difficult to incorporate them into climate models.

There are plenty of places to get information about climate change.

The Oregon Climate Change Research Institute has a lot of scientific information climate change in the Northwest and Oregon specifically. Their most recent Oregon Climate Assessment Report came out in 2017.

For more on climate change, especially policy, in the Unites States and what the Federal government is doing, check out the EPA's climate change page.

The IPCC is a useful resource for global climate change information. Three sections of the most recent IPCC report, AR5, have already been released. The overall synthesis report is set to come out in early November of 2014.

Multnomah County is working to address climate change. Check out our progress and learn about resources we have available for you to take action and prepare for everyday impacts.