What is an eco-roof or a green roof? Eco-roofs or green roofs are roofs that are covered with living plant material.  Much of our land area consists of impervious surface (think tar roofs and paved streets) and eco-roofs minimize the footprint of a roof by absorbing some of the rain that would otherwise become stormwater runoff which pollutes our rivers. The Portland metropolitan region has one of the highest numbers of eco-roofs in the country. Since 1996, more than 120 eco-roof projects have been constructed in Multnomah County, totaling approximately 10 acres. Take a self-guided tour of some of these roofs. Eco-roof tour guide. 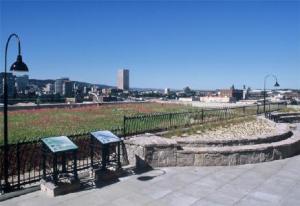 The Amy Joslin Memorial Eco-Roof is open to the public during business hours at the Multnomah Building, 501 SE Hawthorne, Portland, Oregon. Take the elevator to the fifth floor to see this 11,893-square foot eco-roof retrofit that evaporates about 25% of  the buildings rainwater runoff and reduces the air conditioning load between 5-10%. The eco-roof includes and informative interpretive display. Take the #6, #14, or #10 bus or simply walk across Hawthorne Bridge from downtown.

The Amy Joslin Memorial Eco-Roof was dedicated on November 10, 2005 in honor of Ms. Joslin's commitment to sustainability and her leadership in the development of the eco-roof at the Multnomah County headquarters building. 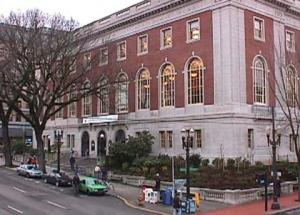 The Central Library Eco Roof is expected to be constructed and open for scheduled public tours in the summer of 2008.  The eco- roof on this landmark building in downtown Portland will provide an unprecedented opportunity for public education on sustainability issues such as stormwater runoff, energy efficiency, and the heat island effect.  In addition, the eco-roof is expected to save the county money in energy costs and maintenance costs. 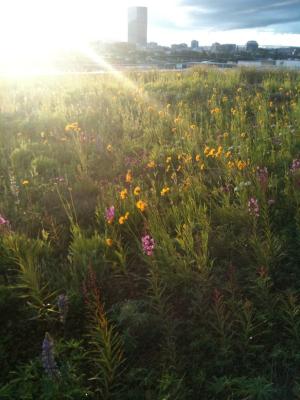