The Board of County Commissioners adopted a policy on Thursday, Sept. 24, that bars the county from having a financial stake in any of the 200 publicly-traded companies with the largest coal, oil and natural gas reserves in the world. 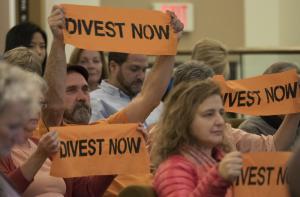 Activist show their support of the board's decision to divest in fossil fuel companies.

The policy, already practiced by the county for more than a year, is intended to encourage companies to accelerate the transition from fossil fuels to clean, renewable sources of energy.

The burning of fossil fuels degrades air and water quality and is a primary driver of global climate change. The impacts of fossil fuel use falls hardest on the individuals and communities served by Multnomah County. Investments in companies whose value is tied to fossil fuels directly undermines the county’s mission of protecting the most vulnerable citizens and building a healthy and prosperous community for all.

“Of course we have to invest money. Of course we have to earn a reasonable rate of return for our citizens when that money is invested,” Mayor Hales said. “There’s a way to do that with an eye on stewardship and the long run. That’s what this is about.” 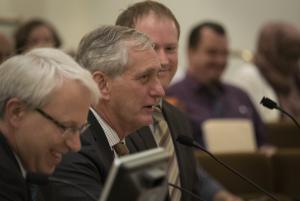 Mayor Hales addresses the Multnomah County Board of Commissioners at Thursday's meeting.

Divesting from fossil fuel companies is a component of the 2015 Climate Action Plan, which establishes a goal of reducing countywide greenhouse gas emissions to 80 percent below 1990 levels by 2050.

“This past summer was a postcard from the future. We had 29 days with temperatures over 90 degrees, which was a record for Portland. We opened our cooling centers more frequently in response to make sure that seniors and people with preexisting medical conditions could get out of the heat,” said Multnomah County Chair Deborah Kafoury during the board meeting.

“Climate change is impacting our community today and we have to act now. We are looking for every opportunity that we can to take action.”

Multnomah County joins more than 400 governments, colleges, foundations and other nonprofit and for-profit organizations worldwide that have committed to divesting from the fossil fuel industry.

2015 Climate Action Plan is a road map for building climate resiliency in Multnomah County. The 2015 CAP will reduce carbon emissions and protect the community from the impacts of climate change.

The forums focus on how prolonged ground shaking could destabilize the Critical Energy Infrastructure Hub, a six-mile-stretch of tanks and infrastructure east of Highway 30 on the river’s edge.

The deadline to submit public comment is Sunday, August 15.