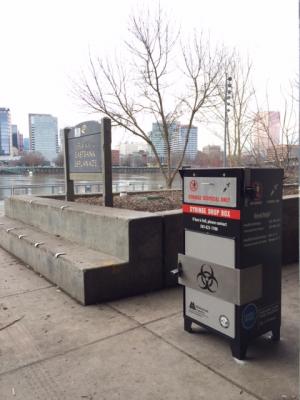 Injection drug use is a complex and serious public health and safety challenge for our community. In the last few years, there has been a significant recent increase in heroin and other injection use in Portland as part of the overall increase in opiate misuse. Despite the success of local syringe exchange programs, some users choose not to participate for a range of reasons including privacy concerns, disability from injury, disease or mental illness, fear of police or a lack of a safe place to store syringes.

Beginning in February 2016, the Multnomah County Health Department and City of Portland are launching a 12-month pilot project called “Healthy Streets’’ to reduce the number of discarded syringes in downtown Portland.

Two secure bins have been installed in key locations on Portland’s Waterfront Esplanade to encourage proper disposal of needles by injection drug users. The locations are on the west waterfront under the Burnside Bridge and on the Eastbank Esplanade near Salmon Street.  A biohazard contractor will empty the bins regularly.

The pilot includes targeted outreach to injection users by Multnomah County community health workers, as well as a public awareness campaign. Other cities have used this community-based disposal strategy to get used syringes off the streets and out of circulation so they are less likely to be thrown away or left in public places.

“This is part of a comprehensive public health strategy to reduce the harm of drug addiction in our community,’’ said Dr. Paul Lewis, Multnomah County Health Officer. “This will help protect the community and at the same time, engage users. Engagement is the first step toward recovery.’’

Safe and legal disposal of syringes and other sharps (2.82 MB)