How New Funding Will Be Spent 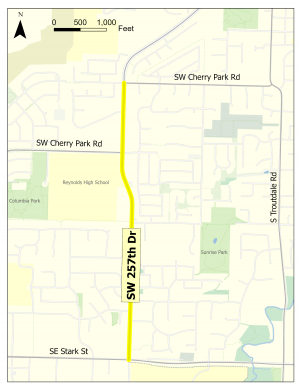 A temporary three-year agreement with the City of Portland, signed in January 2021, will allow Multnomah County to shift $3M a year of state highway funds from bridges to roads. Under this agreement, $3M of the $6.5M originally allocated to the County’s Bridge Fund through revenue sharing with the City of Portland will be funded by Vehicle Registration Fee (VRF) revenue. The Bridge program will see no decline in revenue for maintenance, operations or capital projects.

The Roads program now has a total of $9 million to spend on road projects over the next three years through 2024. Those projects will prioritize safety and resilience for underserved communities and reduce risk to public assets.  Here’s where we will invest the funds:

Provide safer travel on SW 257th Drive in Troutdale, from Cherry Park to Stark Street, by improving sidewalks and crosswalks, adding and improving pedestrian lighting, and repaving the road. This project is ranked #8 in the Capital Improvement Plan. It scores well above average for equity criteria, and is a high-crash corridor adjacent to equity areas identified by the County’s Racial and Ethnic Approaches to Community Health program (REACH). 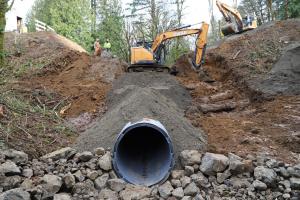 Declining salmon populations harm communities who rely on them for food, especially Native American communities which hold salmon central to their spiritual and cultural beliefs and practices. Undersized and damaged culverts can result in property flooding as winter flood flows increase with climate change.

Construct 49 sidewalk ramps for people with disabilities to safely cross roads in east Multnomah County cities. Already designed with one-time only funds, these ramps are of highest priority in the County based on their proximity to schools, medical facilities, libraries, and other public services, and their frequency of use by elderly and disabled transit passengers. The majority of these ADA improvements will occur on high crash corridors in equity areas identified by REACH.

Our funding went through major changes in 2020 and 2021. This year the funding picture has improved, thanks to federal aid and a revised funding agreement with local agencies.