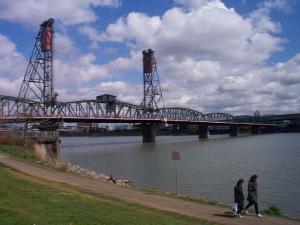 Originally constructed in 1910, the Hawthorne Bridge is the oldest operating vertical lift bridge in the United States. The Hawthorne Bridge is one of Portland’s busiest bridges, safely carrying approximately 30,000 cars and trucks, 800 TriMet buses, 8000 bicycles and untold pedestrians daily across the Willamette River. Vertical clearance for river traffic is lower than the other bridges, requiring as many as 200 openings per month. The main span can be raised 110 feet to allow vessels to pass underneath.

Like other vertical lift bridges, the Hawthorne Bridge uses a system of counterweights and cables to move the lift span straight up and down. The operating system is mostly original, but the electrical power and control systems—which were installed in 1975—were upgraded in 1999. Hawthorne’s counterweights each weigh 450 tons and are supported by the bridge’s two towers, which rise 165 feet above the bridge deck. Major structural modifications on the truss spans have included:

The Hawthorne is Oregon’s busiest bicycle and transit bridge, and is one of the centerpieces of Portland’s bike culture. A constant flow of bicyclists, walkers and joggers flows across its wide sidewalks, which offer great views of the river and the city’s skyline.

The Hawthorne’s main river span is made up of six spans for a total length of 1,383 ft. The three spans east of the lift span section are each 209’3” long; the lift span is about 477 ft long; the tower spans (which flank the lift span) are each 244’3.5” long. The towers rise 165 ft above the bridge deck and support the bridge’s two counterweights, which each weigh 450 tons.

The Hawthorne Bridge was designed by Waddell and Harrington, Consulting Engineers from Kansas City, MO and constructed by the Pennsylvania Steel Co. and United Engineering and Construction and Robert Wakefield. It opened to traffic on December 19, 1910.

The bridge is named for Dr. James C. Hawthorne (1819 - 1881), a physician and politician who co-founded the Oregon Asylum for the Insane on what is now SE Hawthorne Blvd. in the 1850's.