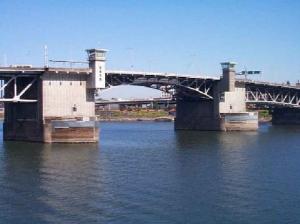 The Morrison Bridge is an important link to the inner city network of highways and bridges. This spot on the Willamette River always has been an important crossing. Strategically located as a gateway to downtown Portland, two other Morrison bridges—built in 1887 and 1905—preceded the current six-lane structure.  The 1887 bridge was Portland’s first Willamette River bridge. Completed in May of 1958, the current Morrison Bridge was originally designed to link Morrison Street, Belmont Street and Water Avenue on the east side to Washington, Alder and Front Streets on the west. In 1961, a series of ramps were added to connect Interstates 5 and 84 to the bridge, making it a major transportation corridor.

Sleek in design—"minimalist architecture," some say—the Morrison Bridge marked the advent of freeways and faster cars in the Portland area. Today, Morrison is a busy bridge. Situated at the intersection of two Interstate freeways, the Morrison carries 50,000 vehicles daily.

A unique feature of the Morrison Bridge is a system of LED architectural lights that can illuminate the river piers in a wide variety of lights, including displays that change color.  Individuals and organizations can schedule these lighting displays for a fee.  The lighting program is managed by the Willamette Light Brigade.

The Morrison Bridge main river structure consists of two 237’-9" steel deck truss side spans and a 284' 6" double-leaf Chicago-type bascule draw span, for a total bridge length of 760 feet. The bridge accommodates six lanes of traffic. Vertical clearance of the closed bascule span is adequate for the majority of river traffic, with openings necessary only about 30 times per month. When the bridge needs to open for a ship to pass, two concrete counterweights weighing 950 tons each can be lowered to raise the lift span leafs.

Recent modifications have included replacing the lift span deck in 2011, adding a shared use path on the south side, and overlaying the east approaches. Earlier projects rebuilt the main pier fendering system in 1965 and 1997, replaced the deck on the east side span in 1980 and rehabbed the west approach deck in 1994. 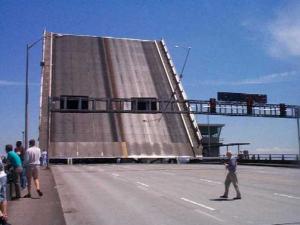 Also on the east side is the Water Avenue Ramp. This ramp was part of the original project in 1958, but was reconstructed in 1961 when Interstate 5 was built. In 2010 the ramp from the bridge was separated from the freeway offramp so that it connects directly to SE Water Ave. The eastbound off-ramp is approximately 324 feet long and has both steel and concrete deck girders supported by concrete columns.

The west approach consists of four ramps which merge over three spans to meet the bridge. The approaches have concrete decks with steel girders supported by reinforced concrete columns and caps. The combined length of the ramps is 1,290 feet.

The Morrison Bridge was designed by Sverdrup/Parcel of St. Louis, MO and Moffatt, Nichol and Taylor of Portland, OR. The main river truss spans and draw spans were constructed by the American Bridge Division of the U.S. Steel Co. Manson Construction and Engineering built the substructure.

A new lift span deck was installed on the Morrison Bridge in 2017.