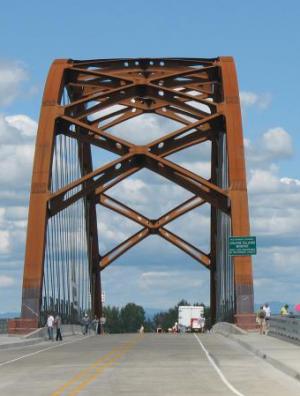 The Sauvie Island Bridge serves as a gateway from outlying urban and industrial areas to the agricultural island north of Portland. The bridge features a main arch of weathering steel that extends above and below the deck.

The tied-arch bridge replaces the first bridge to the island, which was built in 1950. Prior to bridge construction, the only way to get to and from the island was by boat or ferry. The old bridge was unable to support the weight of modern trucks, which put island farms and businesses at a disadvantage. The new bridge has improved facilities for motor vehicles, bikes and pedestrians, as well as improved resistance to earthquakes. By ensuring that island businesses can carry full loads, the bridge helps preserve Sauvie Island’s agriculture and rural way of life for generations to come.

The main arch that spans the Multnomah Channel of the Columbia River is 365 feet long and 82 feet tall at its highest point. Fought and Company of Tigard, OR fabricated the weathering steel that composes the arch, which forms a thin, protective exterior coating of brown rust that requires little maintenance. The dark brown of the steel, along with the wheat-colored concrete, were designed to fit the rural setting.

To ensure that all the necessary parts fit together, Fought assembled the steel arch at its Tigard plant nine miles away from the project site. The arch was disassembled and trucked in pieces to the Port of Portland’s Terminal 2 on the Willamette River north of the Fremont Bridge. There it was reassembled by Schneider Up ironworkers and prepared for final installation. The main arch span was then rolled onto a barge for a journey downriver to Sauvie Island where it was lowered into place on the new bridge. The installation of the main arch span was captured in a short video produced by ODOT.

The new bridge opened on June 22, 2008, after a grand opening celebration attended by more than a thousand island residents and visitors.