The 100-bed shelter was championed by Oregon Harbor of Hope, a nonprofit founded by developer Homer Williams that’s working to bring the business community and its resources to the table in the fight against homelessness.

Working with Harbor of Hope, Columbia Sportswear CEO Tim Boyle contributed more than $3 million of his own money toward construction of the shelter, at 1111 N.W. Naito Parkway in the Pearl District. The city of Portland’s economic development agency, Prosper Portland, contributed the site. In turn, Portland and Multnomah County’s Joint Office of Homeless Services will pay Transition Projects more than $1 million a year to operate the shelter.

“It takes more than just government to do this work; it takes a whole community-wide coalition,” Chair Deborah Kafoury said Monday, speaking during an open house for neighbors. “And this new shelter is just one example of what we can do when we come together, agree on the solution and get to work.”

Chair Deborah Kafoury with Tim Boyle and Mayor Ted Wheeler at the River District Navigation Center on Aug. 26, 2019.
The Navigation Center joins other shelters opening this summer and fall, part of an ongoing evolution of the Multnomah County’s shelter system. Earlier in August, the 120-bed Laurelwood Center, with a clinic and focus on one-on-one case management, opened on S.E. Foster Road. 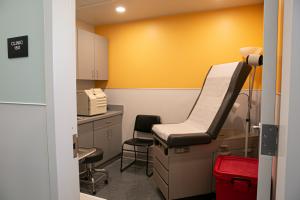 The clinic at the River District Navigation Center.
The Navigation Center offers an on-site medical clinic staffed by Central City Concern, and showers and laundry machines. But most importantly, it offers one-on-one case management, focused on employment, housing and treatment services. People with disabilities, people leaving hospitals and people who are 55 and older will have top priority for referrals.

Overall, the Navigation Center will offer stability and a path back to housing for some of the most disabled and vulnerable people living on the County’s streets.

“The road from homelessness to long-term stability is different for everybody, but the final destination should always be the same: an affordable home,” Chair Kafoury said.

“This is the promise of the Navigation Center as well as other shelters we are opening up throughout the community. Because we have learned that to end someone’s homelessness, shelters should be more than just a safe place to rest; they should also serve as vital connections to housing.”

Williams, the developer who founded Oregon Harbor of Hope, had worked for years to open some kind of navigation center in Portland. 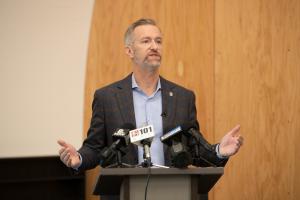 Mayor Ted Wheeler at the River District Navigation Center on Aug. 26, 2019.
During Monday’s open house, he pointed to a study released by Portland State University last week that found, across the region, 38,000 people experienced some form of  homelessness in 2017. Tens of thousands were people who likely never ended up in a shelter or on the streets; instead, they were doubled up with friends or family.

Nodding to Chair Kafoury, Portland Mayor Ted Wheeler and Marc Jolin, director of the Joint Office, Williams said the crisis was too big for government to handle alone.

“These people are working seven days a week, day and night, on this issue,” Williams said. “We cannot and should not expect them to manage this alone. Every citizen and every business needs to join this effort.”

Boyle, who also spoke Monday, echoed that call to action. His counterparts in the business community must work not only continue working with local officials to address this issue, he said, but they also must press state and federal officials for more funding and more action.

And, he said, they should follow his own lead: Beyond just speaking out, “contribute, or volunteer your time, to this issue.” 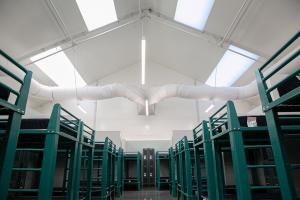 The beds inside the River District Navigation Center.
Wheeler noted that the Navigation Center, and the Laurelwood Center before it, are opening just as the most recent Point in Time Count of homelessness shows a 22 percent increase in people living without shelter on one night — more than 2,000.

The rise in unsheltered homelessness, along with a rise in people with disabilities experiencing homelessness, tracks a rise in housing costs that’s dramatically outpaced incomes for people working minimum wage or surviving on fixed federal benefits.

Wheeler said the report validated the County and Portland’s earlier decisions to invest in solutions for chronic homelessness — with the Navigation Center and Laurelwood opening just weeks after those painful numbers were released, instead of months or years.

“To meet this basic need, there needs to be partnerships,” he said. “This represents the best of what the public and private sector can do when they come together.”

George Devendorf, executive director of Transition Projects, thanked not just government and the business community but also the Navigation Center’s neighbors and neighborhood leaders for their support.

“We owe it to those who have fallen on hard times — this chance to rebuild their lives,” he said. “Together we will make a difference for people on the streets of Portland.”

With a built-in health clinic and commercial kitchen — and a focus on one-on-one engagement — the Laurelwood Center won’t just offer guests a shelter bed. It will offer them a path back to housing.

Oregon Harbor of Hope announces a $1.5 million contribution from Columbia Sportswear's Tim Boyle toward construction of a 120-bed shelter north of the Broadway Bridge.