Hoffman Construction, the Construction Manager/General Contractor for the project, will build the courthouse for a GMP of $246.4 million.

“This is our best estimate based on very solid bids and analysis by our general contractor, trade partners and owner’s representative and team that this is what it is going to cost to finish building the courthouse,” said County Attorney Ken Elliott.

The approval comes after a final funding hurdle was filled by the State Legislature in the 2017 Session. For the 2017-19 biennium, $92.6 million in matching capital construction funds was approved by the State Legislature, completing the state’s $125 million match. The county and state are funding partners on the multi-million dollar project which is slated for completion in 2020.

“We’re confident that the 5.5 percent owner’s contingency is both conservative and will be sufficient to take on any unknowns between now and project completion,” said Ken Elliott.

The funding and arrival at a Guaranteed Maximum Price marks another milestone for the project. The new courthouse replaces the seismically unsafe and structurally obsolete courthouse on Southwest Fourth Avenue and Main, which was built between 1909 and 1914 -- long before modern building code standards for earthquakes were in place.

Contractors have installed foundations and a basement for the 17-story structure at Southwest First Avenue and Madison Street. It will include 44 courtrooms and offices for judges and the district attorney. The project team worked with local trade unions to develop a Project Labor Agreement and set aggressive participation goals for minority and women apprenticeship and journey level workers.

At the board meeting, County Commissioner Loretta Smith asked about a new feature for the project: A dashboard that tracks the number of contracts, dollars, hours, and participation of firms on the project including minority and women-owned businesses, emerging small businesses, and service-disabled veterans.

The dashboard will be on the county website and will be presented to the board on a regular basis explained Project Manager JD Deschamps.

The project’s Labor Management Oversight Committee, which includes unions, equity partners, the contractor and the county, will review the dashboard monthly. 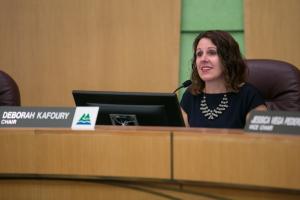 “Hoffman has done a really good job of making sure that everybody they sign up knows these are the rules, this is what we’re doing,” said Deschamps.

“I’m also pleased to hear that people in the community are really excited about our Project Labor Agreement and the goals that we’ve set for ourselves around women and minority contractors participating in this project: Know that we have our eye on the ball and that we will have monthly updates as to where we are in meeting those targets.”