'A Time to Listen, A Time to Act': Faith leaders, providers highlight Joint Office partnerships in call for community to address homelessness

February 25, 2022
Beacon Village PDX in Montavilla opened in December 2021 thanks to funding from the Metro Supportive Housing Services measure.
Matt Lembo, acting director of Beacon Village PDX, took the floor during a panel discussion last week on how faith communities can help address homelessness – and offered some words of practical encouragement.

When Beacon was looking for a place to set up their shelter – and grow beyond the meal program they’d been providing for years – two partners stepped up, Lembo said. First, Bridgeport United Church of Christ offered their parking lot and community building. And then the Joint Office of Homeless Services came through with $1 million in funding.

The 10-pod village opened a few months ago, serving as many as 15 people at a time. Beyond shelter, the program also offers employment and other support services.

“We have created a model for how to do this,” Lembo said, challenging others to follow, “and we are ready to replicate it all over the city”.

Lembo’s story helped exemplify the spirit of the event, called “A Time to Listen, A Time to Act: A Conversation on Houselessness in Portland with County Leaders, City Leaders, and the Faith Community.”

"What can we do to solve this problem?"

The theme was about making connections and sharing resources – and finding opportunities. Rabbi Michael Cahana of Congregation Beth Israel, which once hosted a family winter shelter funded by the Joint Office, summed it up with a question.

Questions from the community included one from a pastor who asked, “What can we do with our 10,000 square foot lot that would help our houseless neighbors?”

Jolin had a quick answer, borne from a long list of partnerships between faith leaders and the Joint Office.

In the past, faith partners have offered land for villages, like the St. Johns Village and Beacon. They’ve hosted overnight shelters, like Portsmouth Union Church and Congregation Beth Israel. They’ve also offered their land for affordable and supportive housing, including Findley Commons, which opened on land provided by St. Mark’s Lutheran Church and includes support services funding from the Joint Office.

“There are multiple ways that the faith community can get involved. There are very specific things that you can do,” Jolin said. “If you have a congregation looking to partner with an existing shelter program to provide a meal a month, or hygiene supplies, please reach out. If you are ready to make a bigger commitment by donating land or providing space for a shelter, connect with us to establish next steps.”

Lived experience panel: The challenges of moving from the streets into housing

The gathering of faith leaders and community organizers did not shy away from difficult questions, but they presented the issue in a spirit of collective responsibility for community members who are struggling with homelessness, addiction and behavioral health issues.

Kevin Farmer shared his story of enduring homelessness, and how a private shelter organization, CityTeam, helped him and now employs him.

Farmer grew up in Gresham with a single dad who worked long hours. He was influenced by peers, and as an adolescent was impressed by drug dealers with their fancy cars and style.

“My only skill was street entrepreneurship. I wanted what everyone else has: a house, a car, a family – I just didn't know the right way to do that. At 21 I was arrested. I ended up in homelessness,” he said. “During COVID, it was really hard to find services – a lot of places had closed or stopped accepting new clients. Some nights, I would get so cold I'd break into abandoned houses and cars just to get out of the cold.”

Mark Rowlett said he was accepted into the recovery program at CityTeam just before the pandemic, when the program stopped accepting new clients for nearly a year.

New investments in shelters through the Supportive Housing Services measure and through federal emergency funds ultimately helped Multnomah County maintain, and then exceed, its pre-pandemic number of shelter beds.

But those beds are full, and beds have not turned over as often during the pandemic. Meanwhile, the need for shelter and affordable housing has only continued to increase during the two years since COVID-19 arrived.

Service provider panel: "Anyone can do what we are doing"

Service providers offered a number of ways that people can get involved, noting that it takes a variety of approaches to end homelessness, and that no single approach will work for everyone.

The key, as Rowlett pointed out to the pastor who asked how his congregation can open up their space, is to “just love them. Everyone who enters your space seeking help – whether you have the resources to help them or not, just give them love. Show them some humanity.”

At one point in the discussion, Commissioner Meieran, who is an emergency room doctor and volunteers with Portland Street Medicine, fielded a question about how to address the medical needs of people living on the street.

She talked about the difficult, important work done by groups like Portland Street Medicine, which receives funding from the Joint Office, and the need to coordinate how services reach unsheltered neighbors with those needs.

"We need to connect those dots. I would love to see a multi-disciplinary approach," she said. "But we're not going to be effective in dealing with the ongoing issues without that." 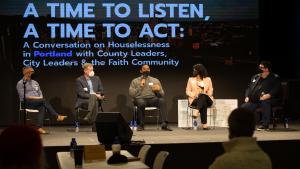 The event also made clear how much help is already out there, even amid the hope to do more.

One woman who works downtown told the panelists about the help she would provide to the teenagers she’d see experiencing homelessness. She would talk to them and connect them to services, and even took two young women into her home.

Commissioner Ryan thanked her – and told her something she hadn’t considered before.

But she hadn’t seen herself that way. She was just someone trying to do the right thing.

Pastor Rick Mckinley of the Imago Dei Community reminded all of the participants at the event that no matter how people see themselves, “whatever tradition we are from, we share things in common.”

“When we collaborate, we all share the spirit that continues to create possibilities,” he said. Today is hopefully a catalyst for some of those relationships. We are part of the city, we are not just spectators. It is our obligation, as Portland rebuilds itself, to be at the table to help shape what that rebuilding looks like.”