*Multnomah County Behavioral Health is developing a modified program that builds and expands the harm reduction approach of the current L.E.A.D. model and incorporate components of prevention, harm reduction, treatment, and recovery. Administration of this new program will transition from Central City Concern to the Multnomah County Behavioral Health Division on July 1, 2021.

The new program will be called PATH (Providing Access To Hope). This team will prioritize Black, Indigenous and other People of Color who are at risk for legal engagement and houselessness and face challenges including substance use and mental health. The purpose of the team will be to help people prioritize their goals, access resources that will help them achieve those goals, and access resources to address substance use and mental health concerns as barriers to accessing those goals.

In an effort to re 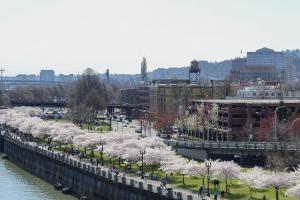 duce future criminal behavior by people involved in low-level drug offenses and reduce the number of persons of color being arrested and referred to the criminal justice system, in 2017, County and City leaders launched an innovative pilot project called LEAD® or Law Enforcement Assisted Diversion. Now in its third year, the program has expanded to areas in inner Southeast Portland.

Law Enforcement Assisted Diversion (LEAD®) is a pre-booking diversion program that was developed in Seattle, WA in 2011 and has now been replicated in four other jurisdictions around the country.  LEAD® allows police officers to redirect low-level offenders involved in drug activity to intensive case management tailored to the individual's needs instead of jail and prosecution. The goals of this innovative approach are to reduce the harm that a drug offender causes him or herself and the surrounding community, reduce recidivism rates for low-level offenders, reduce the number of low level offenders in jail and decrease the number of people of color prosecuted for low-level drug possession.  Participation is voluntary but requires completion of an in-depth assessment within 30-days of arrest for the case not to be filed.

Central City Concern has been contracted to provide intensive case management services for LEAD® participants. The program focuses on high-pedestrian-traffic areas in and near downtown Portland. Now in its second year, the boundary has expanded to include areas of inner Southeast Portland. As the program progresses, stakeholders are committed to a rigorous evaluation of its impact and effectiveness and will evaluate whether LEAD® has resulted in reductions in drug use and recidivism, and is more cost-effective than traditional criminal justice response.

Funding for this pilot program comes from Multnomah County and The John D. and Catherine T. MacArthur Foundation's Safety and Justice Challenge.

The LEAD Pilot project is the result of a collaborative of law enforcement agencies, public officials, and community groups.

Community engagement is a critical component to LEAD.