"It shows what a community can do": Business partners, experienced provider open shelter in Shleifer building

Dozens of people experiencing homelessness began staying at a new shelter inside the old Shleifer Furniture building on Monday, April 17 -- marking the third time since last year that partners in the business community have opened vacant real estate, otherwise awaiting redevelopment, for use by a social services provider.

Monday's opening meant new life, and a new home, for downtown's Columbia Shelter. The temporary facility opened in the midst of this winter's unusually severe weather and was set to close this week.

The Shleifer building’s co-owners, Beam Development and Urban Development + Partners, are offering up the first floor of their space on the Central Eastside, at Southeast Grand Avenue and Stark Street,  before they begin work restoring the 111-year-old building for use as a hotel later this year. The building will remain open as a shelter into the fall. Transition Projects will manage the Columbia at Shleifer, just as it did downtown.

Shelter manager Lawashia Smith, from left, talks to Multnomah County District 1 Commissioner Sharon Meieran and District 3 Commissioner Jessica Vega Pederson during the April 17 opening of the Columbia Shelter in the Shleifer Furniture building.
"This is really exciting, because it shows what a community can do when we really come together and try to get things done,” Multnomah County Chair Deborah Kafoury said during an open house at the space Monday morning.

“We don’t have to always agree, we don’t have to always see eye to eye. But when the going gets tough -- and we’ve got people sleeping outside -- we have to come together,” Kafoury said. “This is what successful communities look like. They’re places where people talk to each other and work toward a common goal."

“Folks from the city, the county, and community organizations are engaging in outstanding work to fill in the rest of the puzzle, pursuing innovative strategies to address homelessness in every corner of the city,” Malsin said. “We look forward to seeing more partnerships to provide shelter and services to those who need them and address the root causes that push people to the streets in the first place.”

Others who helped with the shelter include Portland Mayor Ted Wheeler’s office, Portland’s Office of Management and Finance, Multnomah County’s facilities department, and the city/county Joint Office of Homeless Services.

“Addressing homelessness in our community requires the entire community’s participation. Government cannot do this alone,” Mayor Wheeler said. “Thank you to our private sector partners for stepping up.” 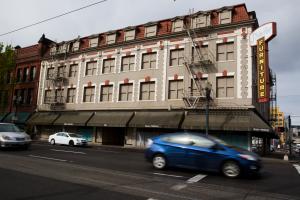 A view of the Shleifer Furniture building on Monday, April 17. The building is the new home of the Columbia shelter.
Transition Projects staffers worked through the weekend to get the space ready for its first guests. The shelter is a nighttime facility, open 7 p.m. to 6:30 a.m., and will serve up to 100 people including women, couples and men. Among men, those who are 55 and older, have disabilities, or are veterans will have priority.

The shelter is available by appointment only, meaning the shelter won’t have a lineup outside each night. Guests must make reservations over the phone at 503-280- 4700, or in person at the Transition Projects’ Day Center, 650 NW Irving.

Once guests have a spot, they can keep their belongings in the shelter and stay as many nights as they need. The shelter has a large common room with tables where guests can have tea and coffee or read or play board games.

Transition Projects is an experienced shelter manager, and the agency remains committed to maintaining good relationships with its neighbors by proactively working through any concerns that may arise.

The new location for the Columbia shelter adds another partner to the effort by Joint Office of Homeless Services and A Home For Everyone to increase shelter beds for homeless neighbors. The previous home for the Columbia shelter was offered by the Menashe family. And developer Tom Cody has donated space in the Bushing & Co. building downtown for a temporary shelter.

A view inside the Columbia Shelter's new home inside the Shleifer Furniture building on Monday, April 17.
A Home for Everyone is the first community-wide initiative to respond to homelessness in Multnomah County. It brings together people who experience homelessness; elected officials from Portland, Gresham, and the county; and leaders from the faith, philanthropy, business, and nonprofit sectors to craft shared strategies.

Overall, A Home for Everyone and its partners have nearly doubled the number of publicly funded, year-round shelter beds in Multnomah County over the past year, adding roughly 600 beds.

Kafoury noted, however, that some of the state funding that’s made that rapid expansion possible is at stake this year. Lawmakers are considering cutting millions of dollars from two programs that pay for shelter and other needs: the Emergency Housing Assistance fund and the State Homeless Assistance Program.

“So pick up the phone, or get on Twitter, or send an actual letter,” Kafoury said, “and tell the Legislature how much it means to you that our community is expanding shelter for those in critical need.”