Board extends fireworks ban in unincorporated areas through October 15

Responding to this summer’s severe fire risk due to drought and high temperatures, Multnomah County Commissioners voted to extend a ban on the sale and use of fireworks in the county’s unincorporated areas through October 15, 2021. The extension follows an emergency executive rule banning fireworks that was issued by County Chair Deborah Kafoury on July 1, which was set to expire on July 31.

“From June 23 to July 6, Portland Fire and Rescue traced just nine fires to fireworks, down from 44 over the same period last year,” said Chair Kafoury. “With much of the summer remaining and little reprieve expected from risky conditions, I’m asking the board to extend the ban.”  The Chair also noted that the Bootleg Fire, the largest wildfire in the nation, is currently burning in southern Oregon. 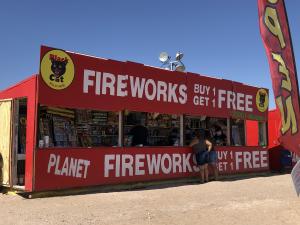 The sale and use of fireworks is banned in unincorporated Multnomah County through 10/15/2021.

Multnomah County has authority to ban the sale and use of fireworks in unincorporated areas, including vast forested areas in east county, the west hills and Sauvie Island.

Multnomah County’s action is in line with other local fireworks bans in Gresham, Portland, unincorporated Clark County and in the city of Vancouver.

Before voting to support the ban, east county Commissioner Lori Stegmann noted that “The 2017 Eagle Creek Fire came literally up to the doorsteps almost of Troutdale.  And that fire was started by fireworks.”

Local fire departments were consulted about the ban, according to Commissioner Stegmann and Liz Smith Currie, a senior policy adviser for Chair Kafoury. The Multnomah County Sheriff’s Office will focus on education efforts to enforce the ban.