The Multnomah County Board of Commissioners on Sept. 24, acting in its capacity as the Board of Health, issued a health advisory on vaping and vowed to consider a local ban on flavored e-liquids and tobacco products.

Spurred by an outbreak of vaping-related lung disease and a steady rise in the rates of teen vaping, the Board promised to take steps to protect youth from nicotine addiction and disease.

It warned people who vape of the risk of complications and lung disease, urging anyone who suspects they may be suffering from a vape-related illness to contact their healthcare provider immediately.

The Board also called on state and federal authorities to ban the sale of flavored products, which are particularly enticing to youth.

Finally, it directed the Multnomah County Health Department to return with a proposal to prohibit the sale of all flavored tobacco products.

“We need to stop teen vaping,” Chair Deborah Kafoury said Tuesday. “We cannot afford to wait as the number of new nicotine addicts continues to grow.”

When health officials first began warning of teen vaping in 2013 and 2014, so few people had seen or used e-cigarettes, that officials needed to show them the devices and demonstrate how they worked. But even then, years before the number of young people vaping increased sharply, the Board warned  that kids would be attracted to the flavors in e-liquids. Commissioners at the time discussed curbing sales of flavored tobacco products. The blowback from the tobacco industry was swift.

“Soon after that we started receiving emails and calls from people who had been contacted by a major tobacco company and transferred directly to our office to object,” Chair Kafoury recalled during Tuesday’s briefing.

Kafoury acknowledged that protecting young people with a Board action would likely affect retailers’ profits.

“But we have to be more concerned about this generation of kids, who have been led by this industry into a possible lifetime of addiction to nicotine,” she said Tuesday. “It is time for the Board of Health to do more to stop kids from using tobacco products.”

Public Health Director Rachael Banks said whatever proposal her division brings forward must include a restriction on flavored tobacco and menthol, which is consumed at the highest rates by communities of color, specifically African Americans. Menthol, for example, makes it easier to start smoking and harder to quit. And nearly 80 percent of African American smokers choose menthol compared to about a quarter of White smokers.

“This is an opportunity to get ahead of the issue, to stop a generation of young people from a lifetime of addiction, and the disease and death that comes from that,” she said. 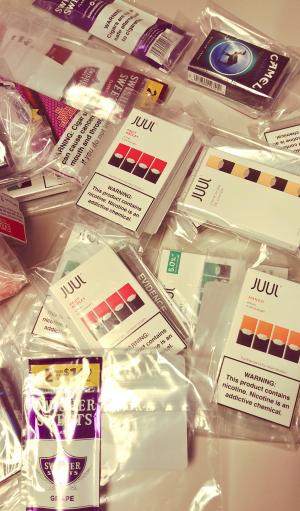 Evidence of tobacco and vaping products illegally sold in licensed tobacco retailers to youth inspectors under the age of 21 years.

Multnomah County has led the state of Oregon in steps to prevent youth smoking and vaping. Over the last several years, the Board voted to treat e-cigarettes like tobacco under the Indoor Clean Air rules and voted to establish a minimum sales age for e-cigarettes.. The Board also established a tobacco retail licensing system that allows inspectors to track where tobacco products are sold and penalize retailers who illegally sell products to youth.

Then, starting in April of this year, the Centers for Disease Control began receiving reports of serious lung disease in seemingly healthy people who had vaped. As of Sept. 19, the Centers for Disease Control and Prevention reported 530 cases from 38 states and one territory, including seven deaths. As of Sept. 17, Oregon reported 4 cases, one of which was fatal.

“The recent outbreak of vaping-related illness is just an indicator that is a much broader issue,” said Commissioner Susheela Jayapal. “I hear a lot that vaping is less harmful than smoking cigarettes. That’s a really low bar.”

According to the CDC’s examination of 370 of those cases, 67 percent are people ages 18 to 34, and another 16 percent are under 18. Two states, Wisconsin and Illinois, published a snapshot of their cases in the New England Journal of Medicine this month. They looked at 53 cases of vaping-related illnesses in their states and found that half were under the age of 19.

The Tri-County Health Officer issued health alerts to clinicians across the region in August and September, and sent a health warning to community partners, schools, and tobacco retailers. Its essential message has been: “Don’t vape. If you do vape, get help to quit.”

“We are here today addressing a more immediate health issue related to vaping,” Vines told the Board. “But we already know that the long-term consequences of nicotine addiction are serious, with effects on the developing brain that control attention and behavior.”

Oregon has reported one death from vape-related lung disease, while tobacco kills nearly 8,000 Oregonians each year; and 1,200 of those people die in Multnomah County.

“In addition to today’s warning about potentially immediate health effects of vaping, we are eager to work with you on lowering demand for these and other products,” Vines said. “While there is talk of action at the national level by the Food & Drug Administration, I would say as your health officer that there are steps we can take at the local level to protect our young people.”

Those who wish to comment on any proposed flavor restriction may submit written comments online.

OHA is warning all Oregonians not to use vaping products or e-cigarettes.

The Oregon Health Authority issued a warning about an outbreak of pulmonary injuries associated with vaping, asks for help identifying cases.

As of September 19, CDC reported 530 cases from 38 states and 1 territory, including 7 deaths.