The board chose to honor the late commissioner on his birthday.

“We thought this date would have more significance and joy than February 8, which just happens to be the day the board is meeting,” said Chair Deborah Kafoury. 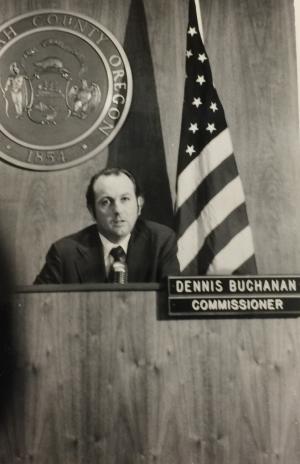 Dennis Buchanan
Buchanan was appointed as a District 1 Commissioner in April 1975, said Terry Baxter, archivist for County Records. His appointment broke a deadlock on the Multnomah County Board regarding the Mount Hood Freeway and sealed the fate of the project which would have torn through Portland neighborhoods, Baxter said.

“He had a vision for how things could be better, more effective, more efficient and also more beautiful and he worked hard to achieve his vision,” Baxter explained. “He brought those qualities to his work at Multnomah County.”

As a commissioner for seven years (1975-1982) and later as county executive, the highest county office at the time (1983-1986), Buchanan was a strong advocate for smart land use and contributed to projects including:

One of the biggest projects he led is Resolution A, which changed how the county delivered services in unincorporated areas, said Baxter.

The implementation of Resolution A was an undertaking involving multiple agencies and  jurisdictions, speakers explained. It led to the cities of Gresham and Portland annexing new areas and changes to urban planning and development. It helped address challenges such as burgeoning suburban development and a notable lack of sewage infrastructure in mid-County.

“It’s a good example of a project that is highly complex, very necessary and probably not very glamorous,” noted Baxter. “It takes a particular kind of person to rise to that challenge.”

Buchanan worked as a journalist at the Oregon Daily Journal and KGW TV before his time at Multnomah County. His reporting addressed social justice issues, such as harsh garnishment laws, which lead to reforms to reduce bankruptcies.

He later left a job as a stockbroker to join public service. He was appointed to the County Commission and later elected.

The Multnomah County Board of Commissioners proclaimed August 3, 2018 as a day of appreciation for former Commissioner and County Executive Dennis Buchanan.

He was a journalist, elected leader, artist and father.

“Even as a kid growing up in this immersive world of politics that you inhabit today, I can see that the work done here in the county is hard,” said Buchanan’s son, Mark Buchanan.

“Delivering these important services in the face of limited resources and navigating politics of the community of such diverse interests is no easy task. In the spirit of my dad who met regularly with county employees at every level, in all fields and roles, I want to thank you for the work that you do for us,” Buchanan said.

Buchanan also noted the difficult decisions his father faced during his time in office. Some that “weren’t always popular” -- still the community recognized his integrity.

“My dad wasn’t a man of towering of accomplishments,” said Buchanan. “He didn’t build nations, wage wars, discover medical breakthrough, save millions. He wasn’t Picasso, but he did accomplish a lot. He was a man of strong beliefs and clear principles. He believed in justice, kindness, fairness, hard work and staying the course.”

The county had lost federal revenue sharing which put a sizable hole in the budget, said Tom Feely, former county budget analyst. “There were very divisive issues. It led to the vision that was Resolution A. That was Dennis’ ability to visualize and plan for the future. I can honestly say I have never worked for a public official who was kinder or nicer than Dennis.”

Commissioner Lori Stegmann recognized Buchanan for his work to preserve the Columbia River Gorge National Scenic Areas in her district.

“It’s the most beautiful area and to know that your father had a role in that natural area is such a gift,” said Commissioner Stegmann

Chair Deborah Kafoury asked the Buchanan family to stand and receive a round of applause.

“I can’t remember a time when I did not know him,” said Kafoury. ‘I’m really appreciative of you Mark and your family, bringing this day forward.”

“Dennis was not a big self promoter,” she continued. “He didn’t feel the need to make himself the face of every event or decision, but he drove a tremendous amount of change both in services and our landscape.”

Chair Kafoury encouraged attendees to honor Buchanan as his family suggested: “Think a warm thought from time to time."