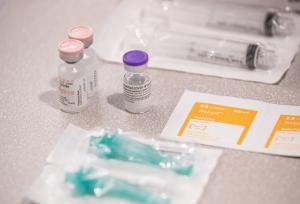 Multnomah County began offering adults in custody at Inverness Jail COVID-19 vaccines on Feb. 2. At least 108 people were vaccinated in the first wave, six weeks after the County formally asked Governor Kate Brown to prioritize those in custody because —like other congregate residential settings being prioritized—the staffing, spacing and underlying health conditions of residents in corrections settings greatly increases risk of transmission, severe illness and death from COVID-19.

People in custody are five times more likely to get infected, and three times more likely to die of COVID-19, according to a state and federal prison study. Multnomah County also has a particular legal obligation to respond to the risk of those in custody. Both the United States Constitution and the Oregon Constitution require the State to provide adequate medical care to those it confines. The government may not be deliberately indifferent to the serious medical needs of individuals confined in its jails and prisons.

The County’s position was reinforced by a federal court ruling yesterday ordering the State of Oregon to immediately begin vaccinating people incarcerated in state prisons, finding the delay in doing so — even as the state prioritized other congregate settings and corrections staff in Phase 1A of its vaccination rollout—amounted to a deliberate indifference to inmates medical needs and risked violating their Eighth Amendment rights to be free from cruel and unusual punishment.

Corrections Health and corrections staff at the facility were offered vaccines in January as part of the state’s Phase 1A priority groups. Vaccinations to adults in custody at Inverness began Feb. 2 as the County manages the first major outbreak at Inverness since the pandemic began.

Although there have been individual cases among staff and adults in custody, until this latest outbreak, there was only one other outbreak of multiple cases (an outbreak is defined as two people or more), at Inverness since the pandemic began. The Inverness outbreak that occurred prior to the current situation was among staff only.

Those cases are a sharp contrast as the County responds to a rapidly developing outbreak identified last month. Since Jan. 15, 2021, 107 adults in custody have tested positive for COVID-19 across multiple dorms at Inverness Jail. The cases were detected through a series of frequent rapid testing of anyone exposed to a known positive case.

All infected individuals are being monitored closely for signs of severe illness. So far, only a small number of people have developed symptoms, almost all of them mild. All adults in quarantine will continue to be screened daily for signs and symptoms of COVID-19, with additional testing planned. There have been no deaths among those in custody.

Steps taken to reduce the spread of COVID-19

The  County takes the health of all adults in custody and the corrections staff extremely seriously. Because of the potential disproportionate impact of a highly transmissible virus on people in custody, the County has taken the following precautions:

When Governor Kate Brown released her vaccination priorities for the State, Multnomah County Chair Deborah Kafoury advocated to prioritize people in custody and the County began planning for those vaccines as the doses became available.

At the same time, the County also prioritized people living in other prioritized congregate settings, working with the Oregon Health Authority and Metro area health systems to identify and and connect vaccine to facilities where people live in long term care and assisted living facilities not covered by the federal pharmacy program; in more than 620 small adult care homes, behavioral health homes and homes for people with intellectual and developmental disabilities.

When a case occurs in custody

When Corrections Health identified a number of cases in multiple dorms in January, all adults in custody with potential exposure were placed in quarantine. Regular testing every few days has been ongoing, and all the adults in custody with a positive test are isolated as a group and separated from those who have tested negative.

The Feb. 2 vaccines were first administered in areas where the Health Officer and Corrections Health staff said they would likely prevent the most spread: to people living in large open dorms who had not yet been exposed to the virus, as well as some with high-risk underlying medical conditions. Subsequent vaccines, when available, will be offered to those who have been exposed and are in quarantine. Finally, those with a positive test qualify for a vaccine but will likely be offered vaccine later as they have at least three months immunity from their own infection.

In addition to carefully following individuals health, the County working with the Sheriff’s Office has  increased the level of PPE required across the facility. Appropriate personal protective equipment is used in all clinical encounters, and prior to each work shift, every Corrections Health employee performs a temperature check and attests to a lack of symptoms and COVID-19 exposure.

Communication will continue to be provided to adults in custody directly from Corrections Health personnel and Sheriff’s Office staff, and by electronic reader boards installed in the dorms and posted public health guidance throughout the facility. Messaging includes information about the virus, recommendations on handwashing, physical distancing, wearing face coverings, and updates on facility and dorm status.

The County has posted public updates regularly on multco.us and will continue as the situation evolves.

All infected individuals are being monitored closely for signs of severe illness. So far, only a small number of people have developed symptoms, almost all of them mild.

On Jan. 21, per public health recommendations, a second round of testing was performed. Eleven additional adults tested positive for COVID-19.

Chair Deborah Kafoury to Gov. Kate Brown requesting that incarcerated people be included among those prioritized for vaccination against COVID-19