April 10, 2018
Chair Deborah Kafoury speaks at the Oregon Harbor of Hope shelter announcement April 10, 2018.
With support from Multnomah County and Portland leaders, a nonprofit led by prominent real estate developers announced on Tuesday major funding for a 120-bed shelter and services center in the Pearl District that could open as early as this fall.

The nonprofit, Oregon Harbor of Hope, revealed a $1.5 million personal donation from Columbia Sportswear CEO Tim Boyle to help construct the shelter. The announcement was part of a call to action for the larger Portland business community — asking business leaders to come forward with funding to run the facility once it’s built.

Described as a “navigation center,” the shelter would operate in a large tent-like structure erected on a city-owned lot just north of the Broadway Bridge on the west side of Naito Parkway.

It would provide short-term beds alongside intensive case management to help people move from shelter to permanent housing. The site would also provide laundry and shower facilities, among other services. The shelter would be just north of the bridge while mobile shower and toilet facilities would be under the bridge. That way the county can continue to maintain the bridge structure.

Once open, the site would become the first year-round shelter built and financed by the business community. Plans for the site follow years of increasingly close collaboration between business and government to address homelessness, including work to open emergency winter shelter and expand cleanup efforts. 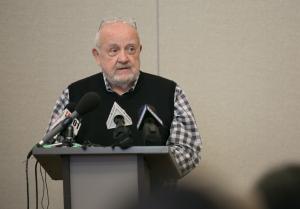 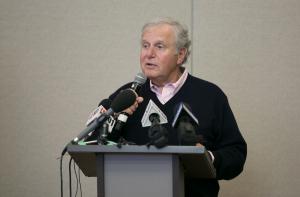 Tim Boyle, CEO of Columbia Sportswear, speaks at the Oregon Harbor of Hope shelter announcement April 10, 2018.
“This takes community. This takes volunteers. And this takes money,” said Homer Williams, the developer who founded Harbor of Hope. “That’s where the business community has to step up. We wouldn’t be standing here if not for Tim.”

“It’s critical that everyone work together,” Boyle said. He said his contribution was an “important step” but called on other business leaders to join him in offering donations and advocating for the resources to “address this very complex issue.”

“If you say something,” he said, “you better do something.”

Chair Kafoury said she welcomed the project in part because of how well it would fit within the city and county’s ongoing work to address homelessness through the Joint Office of Homeless Services and the A Home for Everyone initiative.

Over the past nearly three years, city and county leaders have more than doubled their investments in services, creating twice as many year-round shelter beds and helping thousands more people regain housing or keep from losing it in the first place.

“We haven’t turned to pie-in-the-sky gimmicks. We’ve done more of the things we know that work,” she said. “We’ve added human-scale shelters in areas of our community where people want and need to live, places where they can get a safe night of sleep near their jobs, close to the providers and the networks that sustain them.”

And, she said, “we’ve invested in helping people move out of shelters and into housing as soon as possible, because shelter is not a solution to homelessness, housing is.”

Mayor Ted Wheeler, Chair Kafoury, attorney Robert Stoll and others during the Harbor of Hope shelter announcement April 10, 2018.
Mayor Wheeler said the public-private vision unveiled Tuesday — with Harbor of Hope raising cash to build and operate the shelter, while the city donates land — “is the kind of effort that can help us move the ball forward.”

But he also cautioned that it was “just one project” and said the community needs to invest even more in housing and shelter. 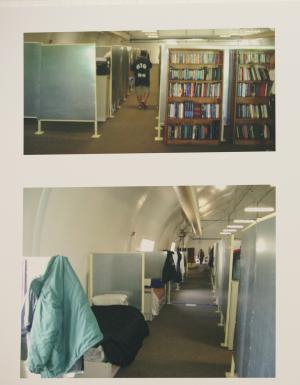 Inside a navigation center concept.
Partnership with universities

Shoureshi, president of Portland State, also embraced Harbor of Hope’s plan and spoke about the synergy in having academic researchers — including seven of Portland State’s deans — bring their skills to bear alongside government agencies, neighbors and business leaders.

He said about a third of Portland State’s student body live on less than $20,000 a year, challenging many students with housing and food instability.

“This is close to our heart,” he said.

Bangsberg said the people being pushed onto the streets are increasingly seniors with fixed incomes and people who’ve worked all their lives but don’t have the ongoing incomes or savings to keep pace with Portland’s rapidly increasing rents.

That economic crisis, he said, is fueling a public health crisis. He compared the work to end homelessness — overcoming “fear, stigma and denial” — to the work that took root decades ago in the fight against HIV.
“Today, we need humane, sensible strategies with the life-saving treatment called affordable housing,” he said. “If we can solve the HIV pandemic, we can solve homelessness here at home.