Health Department colleagues mourn ‘Our very own angel of song’ 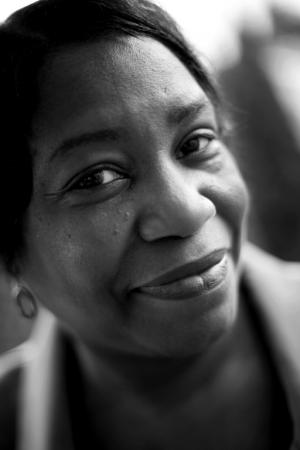 Erik Vidstrand had just moved into his new Multnomah County office at Gateway in 2008 when a community health specialist stuck out her hand in greeting.

“You're the Linda Hornbuckle?" he asked.

The “Soul Diva’’ of the Northwest was a vocal stunt pilot whose ability to wrap around a jazz tune or gospel tremble had pushed her to the front of Motown’s “Body and Soul” band and Portland’s “No DeLay” blues band. She’d toured with Quarterflash and Dan Reed. She drew fans to Portland music venues including the Candlelight Room, Jimmy Mak’s and the Waterfront Blues Festival where Peter Dammann first suggested she sing the national anthem on the 4th of July 20 years ago. Sing it alone. Acappella.

“She had mostly just been singing in church,’’  her longtime friend and former band manager recalls. “The sheer power of that voice in front of 20,000 people, she blew the park apart,’’ continued Dammann. “She sang almost every year from then on and every time the hair on my neck would stand up and I would be close to tears, it was that intense.”

When Linda took the stage July 4, 2014, visibly changed from cancer, Dammann said his heart sank, until she opened her mouth. “It was so powerful, I was baffled,’’ he said. “I thought, that voice isn’t even in the physical being, it’s rooted somewhere else.’’

When news came that she had died last Saturday, Oct. 4 at the age of 59, music writers across the country called Linda an “incredible talent,’’ “legendary,’’ and “mind-boggling.’’

“Her fans,’’ Dammann said, “know nothing about her day job.’’ 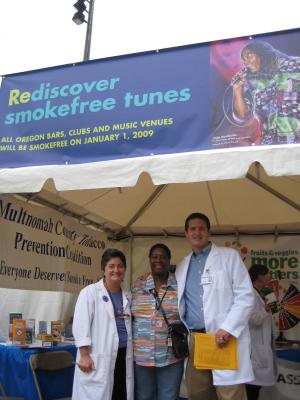 Linda Hornbuckle stands between two OHSU volunteers at the county's smokefree workplace booth at the 2008 Waterfront Blues Festival. The banner above was just one of many displaying Linda's image and promoting smokefree workplaces.

Almost immediately after they met at the Health Department, Vidstrand bonded with Linda over Oregon’s Smokefree Workplace law and their desire to expand that to bars and clubs. Linda had performed for years in smoky bars, and was upfront about her concerns over second hand exposure. That year, she asked her fans at the Waterfront Blues Festival not to smoke during the performances. Banners promoting smokefree areas were hung proudly. She did interviews on the radio about the dangers of secondhand smoke.

When the jazz club Jimmy Mak’s held a party kicking off the January 2009 law, Linda was the headliner. Today, Vidstrand said, the area around the musicians and crowd at the Waterfront Blues Festival is almost entirely smoke free.  “We can thank Linda for this,’’ said Vidstrand, the County’s tobacco enforcement coordinator.  Her efforts earned her the county’s Public Health Hero award in 2009 and Oregon Department of Human Services’ Outstanding Individual Leadership Award.

Despite her star power, Linda donated her performances constantly alongside the late pianist Janice Scroggins. Ronnie Meyers, the current program coordinator for the Healthy Department’s Healthy Birth Initiative, met Linda when she was performing for a number of National Black AIDS Awareness Day Activities. Linda had been working at several programs at the health department when she went to work as a health educator with Meyers. The Health Department had begun offering the relationship education program 4REAL and Linda split her time between the youth program and the African-American Sexual Health Program.

“She was an excellent trainer and connected with adults, parents, faith leadership and youth on a deeply personal level,” Meyers said.

Health workers who watched her were dazzled.

“She would listen without judging and teach without degrading,’’ said Rachael Banks, program director for the Healthy Birth Initiative.

A mentor and role model

County health educator Mariotta Gary-Smith keeps a photo of herself with colleague and mentor Linda Hornbuckle (right) hanging in her cubicle.

Growing up in Portland, Multnomah County health educator Mariotta Gary-Smith had heard stories of Linda’s singing and talent from her grandmother, mother and many others in the Portland African-American community.

“She was our own 'angel of song’,’’ Gary-Smith said. “Her voice could make you dance in the streets, shout with joy and thanksgiving or remember the exact moment in time when you felt what she was singing about. Her voice transported you to a place of pure soul.”

After watching Linda’s work in STD/HIV prevention, sexuality education, or parenting classes, Gary-Smith said, “I became a diehard Linda Hornbuckle fan, and this had nothing to do with her musical gift. Her voice was a powerful tool that carried her all over the world – but her love of community and commitment to improving the lives of others made her so wonderful.”

After being diagnosed with kidney cancer, Linda left the Multnomah County Health Department in August of 2013. In the days after she died, Erik Vidstrand sat down and wrote a remembrance. Pam Hiller, another Health Department colleague and a friend of Linda’s went through her photos.Gary-Smith listened to her arresting version of “Amazing Grace,” cried and wrote the following:

“In the midst of my hurt, her voice once more soothed me, lifted me and took me to the place in my soul she held…I hope I continue to do work here that will make her proud. I hope that my patience-testing will be her memory pushing my spirit in the right direction. I plan to use my voice more often, as she used to tell me that more folks need to hear it.”

“‘Mama Linda,’” Gary-Smith concluded, “taught me to serve with love.’’

Linda is survived by her husband Mark Young. A ticketed musical celebration of Linda’s life will be at 7 p.m. on Tuesday, Oct. 14 at the Crystal Ballroom, 1332 W. Burnside St. in Portland.