“The only thing we lacked was a home": A Place For You pilot project houses four families

For Sherry, it’s the little things that seem to matter the most.

The sense of calm she gets when she opens the door to her home. A bed of her own. A refrigerator where she can store her own food.

She hasn’t felt that calm in a long time. That’s because, for the past couple of years, she and her niece have been living in her vehicle, when they haven’t been staying in shelter beds or motel rooms funded through shelter vouchers.

Sherry is one of a handful of people participating in Multnomah County’s A Place For You pilot program. The initiative paired homeowners with families experiencing homelessness by hosting those families in a new backyard accessory dwelling unit. The goal was to give tenant families stability and privacy, while allowing homeowners an opportunity to make a difference.

“For the first time in ages, I’m able to experience the feeling of, ‘Oh, I can rest now,’” Sherry says. “That feeling, you can’t feel it when you’re living in a truck. When you need to use the restroom. When you need water. There are no words to describe how you feel when you’ve been in a situation where you haven’t had any of that.”

Here’s how the program works: Homeowners in Multnomah County volunteered to have an accessory dwelling unit (ADU) constructed in their backyard. In exchange, they agree to host a family experiencing homelessness. The County and its partners help the host family with rent and, after five years, the homeowner has the option to buy the ADU at fair market price.

Enhabit, a local nonprofit that helps homeowners and partners build better living spaces, manages the project on behalf of the County. Along the way, families will be able to access social service support from the Joint Office of Homeless Services working with A Home For Everyone, our community-wide initiative, led by Portland and Multnomah County, to address homelessness

Sherry and her niece enjoying a moment in their new home.

The pilot program is a first for Multnomah County. Beyond giving families a safe place to stay, the project aims to open other doors as well: social support from neighbors, stability in school, and the ability to feel connected to a community.

A Place For You is one out of a number of projects aimed at ending homelessness in Multnomah County.

Partners in A Home for Everyone helped more than 5,900 people leave the streets or a shelter for permanent housing in the fiscal year that ended June 30. That’s all but double the number housed just four years ago.

Access to shelter has also doubled, to more than 8,000 people last year, with thousands more people also receiving rent assistance so they never have to become homeless in the first place.

A Place for You is another example of the County and its partners building on that success by trying new things, to reach even more people, even as they continue work that’s been successfully helping thousands of neighbors either keep or regain stable housing.

“Solving homelessness must be a community effort,” says Mary Li, the director of the Multnomah Idea Lab. “We’ve learned there are many people in our community who are eager to help and, when they see a way to help, they will.”

More than 1,000 homeowners volunteered to be among the first to participate. One of those homeowners is Martha Chambers. 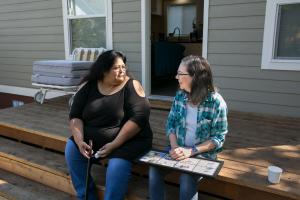 Sherry chats with homeowner Martha Chambers.
Chambers first learned of the program from a news article. She volunteered and was one of four to be selected. When builders trucked a completed ADU into her backyard, she was ecstatic.

“I can’t contribute huge amounts of money, but this is a perfect opportunity for me to help a family with my backyard,” Chambers says. “It’s a win-win for the host family and the previously homeless family.”

Chambers was eager to learn more about the family she’d be hosting. That family turned out to be Sherry and her niece.

Some nights felt hopeless. One January night, while Portland experienced a winter weather emergency, she and her niece camped in a parking lot in their car. While her niece slept, she remained awake, watching snowflakes fall on her windshield. They became stuck in the snow, and didn’t leave for days.

“It was just an awful feeling,” she says. “Because I can’t call anyone, and I can’t tell anyone, ‘Can you help me?’”

Everything changed for Sherry in July 2018 when she found out about A Place For You. She applied, hoping she might get chosen. That day, she and her niece drove by their prospective home, just to see what it looked like. It was a gray, 288-square-foot cottage with white trim, tucked in Chambers’ North Portland backyard.

A week later, Sherry was in the middle of an appointment when her niece told her the news. The program had chosen them to be one of the tenants. At first, she didn’t believe it. It was like winning the lottery, she says.

Sherry says the first night was one of the best of her life.

“We lay down on our beds and talked about everything in the house. ‘These sheets are comfortable. Is your bed comfortable? Mine is comfortable,’” she says. “There are so many little things that people take for granted: the softness of the bed, the comfort of a pillow, clean sheets.”

With a safe space to call home, Sherry says, she’s been able to focus on other important needs,  like getting her niece to school every day, or taking care of appointments.

When Sherry drives around town, she sees landmarks where she used to sleep, or where she would have to go to change her clothes. They bring back memories of needing to survive day by day.

Now, Sherry has hope — and a place to call home.

“It’s just the greatest, most amazing thing,” Sherry says. “The only thing we lacked was a home. Everything is falling where it should now, and I’m hoping other people will be able to enjoy the same situation and get into a home like this one."