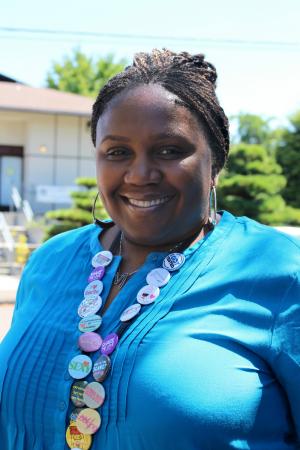 Few people can envision the average six-year-old girl discussing politics and social issues, but then again, Mariotta Gary-Smith didn’t grow up in an average household.

Gary-Smith remembers watching the national news as a child with her grandparents in their home in Southeast Portland. As they sat around the dinner table, they discussed current events and how issues affected ordinary people. Even as a young girl, Gary-Smith joined the conversation, equally interested in the topics.

That was just one result of growing up in a family committed to social justice.

Gary-Smith is a third-generation community worker and second-generation Portland native. Championing social justice and human rights was very much a part of her fabric, leading her to becoming a trusted and respected educator for the African-American Sexual Health Equity Program in the Multnomah County Health Department’s Community Health Services (CHS) division.

She works with young people and their families to ensure they have the conversations and education needed to prevent disease and support a healthy future.

“I can see where communities had different expectation of how they were treated,” Gary-Smith says, looking back. “My perspective is that as a neighborhood has changed and as the demographic has changed, there are some consequences.”

Gary-Smith’s family was deeply invested in activism. Many would recognize Gary-Smith’s uncle, Tommie Smith, the winner of the 1968 gold medal for the 200-meter dash. More would recognize him as the man who raised his right fist in the iconic photograph from those Olympic games.

Though Gary-Smith wasn’t around when that historical event occurred, the aftermath is something she remembers. Her uncle’s family received death threats and racist media backlash, but Gary-Smith took something else away from it.

“What I learned from that is that it’s important to be really resilient,” she says. “To really be aware of the courage that it takes to stand for something you believe in and the sacrifice that you have to be willing to make in order to move something forward.”

Her uncle persevered through the backlash and being suspended from the U.S. Olympic Team and has since become a celebrated activist and coach.

Her grandparents were especially involved in social activism and were sure to instill those values onto Gary-Smith from a young age. Going to community meetings with her grandmother, a member of the NAACP, was typical for Gary-Smith.

It was her mother, Sharon Gary-Smith, who influenced Gary-Smith’s current path.

“When I was younger, my mom was the director of a community health clinic in Seattle,” says Gary-Smith. “I got to see people with children, older folks, all kinds of people came to seek medical care and I got to see how they were treated.”

While attending Agnes Scott College for her undergraduate degree, Gary-Smith combined her interest in science and human sexuality.

“They didn’t have a public health focus or major when I was in college so I designed my own,” says Gary-Smith. This entailed double-majoring in psychology and sociology. Shortly after, Gary-Smith went through a period of working and attending various prestigious schools. She  went on to get her master’s in public health at the Rollins School of Public Health at Emory University. She then completed the National Scholars Program at the Center of Excellence in Sexual Health, which was located at the Morehouse School of Medicine.

Understanding the science of medicine and public health wasn’t enough for Gary-Smith. Communication is key, and she noticed a significant lack of it between youth and the adults they trust in their lives. Her role as a sexual health educator bridges that gap.

“One thing I get is that [parents] want to know how to talk to young people,” she says. But many parents and adults responsible for young people, Gary-Smith believes, approach sexual health and sexuality with their children with a “fear-factor” mentality.

“I encourage them to have a conversation with young people in a way that allows an exchange, as opposed to ‘this is what you’re supposed to do, if you don’t do it, this is what happens,’” she explains.

She’s quick to comment that she would never tell someone how to raise their kids, but that she does her best to provide honest communication. This tactic has helped Gary-Smith reach out to youth and become what they call a “cool old person.” She attributes this reputation to her efforts to connect with the youth she works with, which includes keeping up with slang and respecting the knowledge that they already have about sexual health and sexuality.

“I don’t want to make them feel less-than,” she says. One tactic she uses to keep up is talking to her godchildren, nieces, and nephews. They talk about issues that people their age are facing, and Gary-Smith shares what she knows with her younger family members.

“They keep me current,” she explains. “I encourage young people to listen to older adults, adults that they trust, and I encourage those trusted adults to listen to the youth that are in their lives.”

Each day Gary-Smith tackles questions varying from how to safely and properly use contraceptives, to how to communicate one’s needs and concerns with their sexual partners. She believes the most important thing is respect and communication in many of these instances.

“The respect you are hoping to get from someone else, you also have to give to them,” she says.

At the Multnomah County Health Department, Gary-Smith specializes in HIV and AIDs prevention.

In 2010, the Centers for Disease Control and Prevention reported that around 44 percent of all new HIV infections among adults and adolescents were African-Americans. Gary-Smith is surprised that these historically high levels haven’t changed much over the years. She attributes these numbers largely to the stigma around these diseases within the community.

“We have to go back to the beginning,” she says, referring to the myths she’s often busted in her classes and workshops. “You can’t contract HIV from eating off someone’s plate or...kissing them. There is false information...that we find in conversations with people.”

Alongside the myths and stigmas, Gary-Smith also takes into account the historical context between African-Americans and their health.

“You have to talk about poverty and environment...economic imbalance and regulations,” she says. “It’s sort of like an onion, there are a lot of layers you have to peel back to get folks to a place where they can understand.”

Contextually, the conversations Gary-Smith encourages are challenging and personal. When discussing HIV/AIDS, a disease with a historical reputation for infecting men who engage in sexual acts with men, homophobia can be another obstacle. Gary-Smith notices homophobia is significant in communities of color, or people of color who identify as LGBT often feel stigmatized or ashamed.

“It boils down to a moral struggle for some people,” Gary-Smith explains. “People have the right to choose and be who they are, and they have the right to access...healthcare, information and choices that will enable them to have a healthy outcome.”

“There’s so much taboo around talking about sexual health and sexuality,” Meyers says. “She’s really skillful at helping people talk about the stigma and...think about their sexual health.”

Recently, one participant approached Gary-Smith after a community health worker training session and said one of Gary-Smith’s workshops inspired them to do more community work. This touched Gary-Smith, and she describes herself as “humbled” by the experience. When they tell her that they are going to share what they learned with friends and family, she feels inspired.

“[They are] able to advocate for themselves and make a decision that impacts their health outcomes for the better,” she says. “They took something that I said that made a significant difference in their lives,”

The most challenging aspect of her job? Funding.

“It makes it hard because there is so much that we can’t do that we really want to do,” she says. For outreach purposes, she would love to add more people to her current three-person team.

For now, Gary-Smith is making do with what she can. CHS currently partners and collaborates with numerous programs and departments within Multnomah County, including the Healthy Birth Initiative (HBI) and the Community Capacitation Center (CCC). This month, Gary-Smith will lead a series workshops for youth and their parents in local transitional housing centers focused on building communication skills, as well as sexual education.

“I was fortunate enough [that] I had a strong support system,” she says. “I try to give people the information and potentially teach them the skills that could help them find a support network.”