In the early morning on Friday, June 1, a large group of young people ages 16-24 gathered at the Oregon Historical Society in Southwest Portland to celebrate the annual SummerWorks kick-off event.

One thousand teens and young adults will be employed through the program this summer, a new record for SummerWorks. “It’s a milestone my friends and I have been striving for for a long, long time,” said Worksystems Executive Director Andrew McGough. The youth will work as interns for organizations like Boeing and Elemental Technologies, as well as Multnomah County.

This is Multnomah County’s sixth year partnering with Worksystems, the city of Portland and several other organizations to make SummerWorks possible. The program pays for the wages of its young participants, 93 percent of whom are low-income; 76 percent are youth of color.

County Commissioner Loretta Smith started off the event by inviting two interns who will be working in her office this summer, Terrance Penn and Brooke Graham, up to the stage with her. “I feel better when I have my kids around me,” Smith said. She then led the audience in a playful chant: “When I say ‘summer,’ you say ‘works!’ Summer!”

Commissioner Smith talked about her first job out of college as a receptionist for U.S. Senator Ron Wyden, who was then a U.S. Representative. Wyden, who gave a speech at Friday’s event, was someone who encouraged Smith to run for County Commissioner back in 2010. 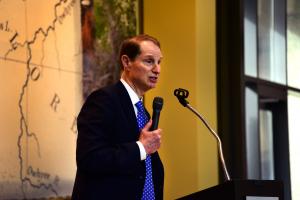 Commissioner Smith has been a vital champion for the program, securing SummerWorks funding over the past six years. To do so, she has worked closely with Portland Mayor Charlie Hales, who also spoke at the event.

Hales pointed out that these summer internships could open doors for the kids they didn’t know were there. He explained how a job in construction eventually led to his position as the Mayor of Portland. “You never know where that first job will lead you,” he said.

The keynote speaker was Ian Williams, the founder of Deadstock Coffee & Gallery, a sneaker culture-inspired coffee shop in Northwest Portland.

Williams explained to the crowd how he ended up where he is today –  his path included working as a janitor for Nike, which led to a job as a Footwear Developer. Once in this position, Williams discovered it lacked the sense of community amongst sneaker enthusiasts he was looking for. 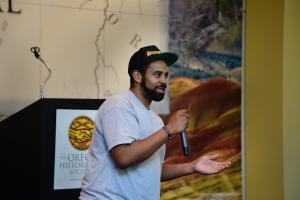 Ian Williams, the founder of Deadstock Coffee and Gallery and keynote speaker at Friday's event.

Williams wanted to build this platform, so he decided to open a coffee shop for sneaker lovers to gather.

“Use this opportunity. This is really real. This is a lot of work,” he said to the young people in the audience, pausing for a few moments. “Make sure you give back.”

“You need to see people who you value. And they tell you the truth. And you know that they have your back,” Commissioner Smith said to the SummerWorks participants. “We have your back at Multnomah County, city of Portland, and Worksystems. We want to make you successful.”

Then, hugging Penn and Graham close, she added, “And I just want to say I am so proud to have these folks right here in my office, making sure they hold my feet to the fire, that I’m bringing what I need to bring to the community.”

Graham, 16, was on day three of her job working as Commissioner Smith’s assistant. Graham says she sees Smith as a role model and hopes to have similar qualities as the commissioner when she is an adult. She’s grateful for the job SummerWorks has provided her.

“Without SummerWorks, I wouldn’t have this opportunity,” she said.

A portion of the SummerWorks class 2016.