On her small family farm in rural Loon Lake, Washington, Wendy Lear follows a slow-moving farm truck traveling between rows of hay bales. Diesel smoke fills the air around her. The metal sound of machinery scrapes at her ears.

Every time she encounters a bale, she braces herself. Just like generations before her, she uses her body to hoist the 70-pound bales onto the flatbed, careful not to strain her back. She repeats the process every 20 yards. The year is 1976.

After a day of “bucking bales,” Lear rises early the next morning to open her family restaurant, the Dinner Bell, at 4 a.m. to feed hunters with her mom before sunrise. Her wages help support the family. She saves her tip money to buy them gifts during the holidays.

Even as a kid, Lear is no stranger to hard work.

Today, as the interim director for the Health Department, there’s plenty of work to do. She and interim co-director Vanetta Abdellatif are responsible for managing a $300 million budget, supporting nearly 1,400 staff, and promoting the health of almost 800,000 Oregonians -- all while navigating political and financial uncertainty and leading the charge on the $94 million Health Department headquarters construction project.

“The challenges for the department are operational in nature,” Lear says. “We’ve got our new headquarters, we’re facing significant financial constraints, and federal dollars are becoming scarcer and scarcer. These challenges aren’t outside of my scope.”

It’s an unconventional path for Lear, whose childhood was anything but ordinary.

When Lear was growing up, everything revolved around the farm. When she wasn’t operating a tractor or baling hay, she’d take care of her family’s many animals. She remembers bottle feeding calves and raising baby pigs in a crate in her living room.

Wendy hides in the alfalfa with her family deer.

The income from the farm wasn’t enough. To make ends meet, the family relied on their restaurant off Highway 395 between the Idaho Panhandle and the Canadian border. Every day, Lear and her mom worked in the kitchen while her step-dad worked for the state on the road maintenance crew, plowing snow in the winters.

From an early age, Lear knew her experience was different from others’. During the summers, wealthy families would come to town to stay in their lake homes. She noticed the contrast between the locals and the affluent vacation homeowners from behind the counter at the family restaurant.

At the same time, she knew she was privileged in her own way. Her house was the only one on their dirt road with water and electricity. Neighbors used the family’s well to stock up on the water for the entire week.

“The whole community was poor,” she says.

Resources were thin. Her elementary school was divided into two rooms: four grades in one, four in the other. The school’s U. S. flag only showed 48 stars, though Alaska and Hawaii had become states more than a decade earlier. When her dad — a military veteran — passed away, her family donated his flag to the school.

Her life changed when she enrolled in a speech and debate program by accident. Her debate coach took notice of her and started mentoring her and challenging her academically. Lear remembers him asking her one day, “Do you want to live here for the rest of your life?”

She didn’t. And college became her goal. Her debate coach helped her schedule the best courses and prepare for the rigors of college. Eventually, acceptance letters started arriving in the mail. She decided to enroll at Evergreen State College - a progressive liberal arts school - because it was the most affordable option.

When the time came to head off to school, Lear made the eight-hour drive to Olympia, Wash. with her mom in their Ford pickup truck. She became the first person in her family to graduate high school and go on to college.

Lear wanted to boost her chances of getting a job, so she took classes that could help her with a career. “I was probably the only self-declared business major at Evergreen,” she jokes. “I took every accounting, economics and statistics course they offered.” 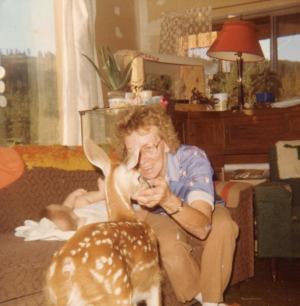 Wendy's mother tending to two babies: her nephew and the family deer.

While at Evergreen, she also became interested in social justice. Her classes exposed her to labor rights, which resonated with her because of her working class background. And soon, she discovered she could use a career in business to advance social good.

After graduating, Lear found a job in Oakland working for an investment firm with a social justice mission. The firm managed a fund that allowed clients to invest money in a way that was socially and environmentally responsible. Its fund avoided companies that engaged in unfair labor practices, disobeyed environmental standards or did business with countries known for human rights violations.

Later, she moved to Portland and took a job in finance for Outside In, a nonprofit providing social and medical services to homeless youth.

After several years at Outside In, Lear moved to the County in 1997, starting as a budget analyst for Community and Family Services, which later became the Department of County Human Services. She held a number of financial and operational roles before she was promoted to Business Services director for the Health Department in 2004.

She was drawn to the job because she wanted to be behind the scenes supporting the mission-driven work of the County. “I felt as committed to achieving our mission as any provider or practitioner,” she says, “making sure we were well managed so we could provide the best services to the most people possible.”

Her motivation was personal. She knew firsthand what it was like to grow up in poverty and having to work two, sometimes three, jobs to scrape by. And for most of her childhood, her family didn’t have health insurance.

“I don't remember going to the doctor or dentist until I was a teenager,” she says. “My step-dad had lost most of his teeth and was only able to afford dentures in his early 60s.”

Experiencing those obstacles during her upbringing inspired her to use her role to make a bigger positive impact.

In 2008, she helped develop a program that would provide access to insurance and affordable healthcare to undocumented pregnant women. The women didn’t otherwise qualify for Medicaid because of their immigration status. Multnomah County was the first county to pilot the program. Five years later, the Oregon Health Authority adopted the program statewide.

And during the Employee Recognition Awards in 2011, Lear was part of a team that was honored with the Diversity and Cultural Competency award for establishing Multnomah County’s Equity and Empowerment Lens. The tool helps staff consider racial, social and health disparities in their work decisions.

At the same time, Lear became known for her recruiting and mentoring skills among staff.

Eric Arellano is the County’s deputy chief financial officer. In that role, he helps oversee more than $1 million in County funds. He first got his start at the County in 2006 as a budget analyst on Lear’s team.

Arellano says she mentored him for years and gave him opportunities to grow. When he was considering applying for a job elsewhere in the County, she didn’t hold him back.

“A lot of the things I do today are based on her guidance: how she manages her employees, how she approaches her work, how she navigates with other leaders in the County,” he says. “I wouldn’t be here if it wasn’t for Wendy.”

Lear remained the Business Operations director for more than 10 years and, in 2014, began to serve as the deputy for Joanne Fuller, former director for the Health Department. When Fuller announced her retirement in September, Chair Deborah Kafoury named Lear an interim director.

When Lear got the news, she was prepared. She had already served as acting director from time to time. And as Business Services director, she had a pulse on many of the department’s needs.

County leaders are outspoken in their praise of Lear’s track record. One of them is Henry Alaman. As facilities director, Alaman manages 131 facilities across more than 465 square miles of County property. When he got the news of Lear’s interim appointment, he says he felt confident knowing Lear would do well.

“Wendy’s got a well-honed set of leadership skills,” Alaman says. “The role takes a lot of patience, collaboration, good listening skills, and a vision. She’s someone who can continue to move and progress the department during an uncertain time.”

For Debi Smith, the Human Resources Operations Manager for the Health Department, Lear is an excellent fit for her new role. She says she’s witnessed Lear’s leadership style firsthand and she’s inspired by Lear’s commitment to diversity and equity.

Smith says Lear has gone to great lengths to build a diverse team. She says Lear always makes sure her positions are posted in community newspapers and will restart job recruitments if they didn’t attract a diverse pool of candidates. And Smith says Lear has assembled a Business Operations team that’s become the most diverse division in the department.

“I respect her leadership, particularly around hiring a diverse workforce,” Smith says. “I know she gets it. She walks the talk related to diversity recruitment and hiring, and she understands why it’s important for our staff to reflect the community we serve.”

Today, Lear is busy as she settles into her new interim role. And while the County seeks a permanent director to fill the position, she’s looking at ways to make an impact.

She wants to make the department’s recruitment and retention efforts more equitable. And she says she wants employees to feel more excited about and valued in their work, especially during challenging times. “We’ve gone through hard times before,” she says. “Despite hard financial times, I’m optimistic, and I’m excited to see what lies ahead of us for the next year.”

Helping to lead the County’s largest department in the interim is no easy task, but Lear is up for the challenge. She's used to overcoming obstacles.

“My upbringing made me pretty resilient,” she says. “Working in this environment is my strong suit.”

Wendy Lear and Vanetta Abdellatif will continue to co-lead the Health Department while Chief Operating Officer Marissa Madrigal leads a nationwide competitive recruitment for the permanent Health Department director in 2018.

The director of Integrated Clinical Services has advocated for electronic patient records, led an expansion of services and has mentored emerging leaders.