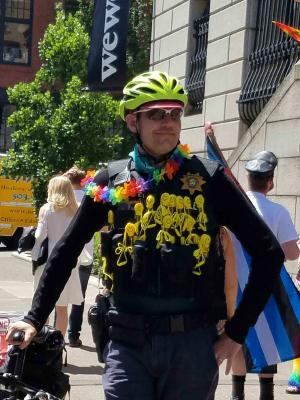 A Parole/Probation Officer (PPO) with Adult Services Division poses with his bike in the 2016 Pride Parade.

Portland’s annual PRIDE Festival was held on June 18th and 19th. DCJ staff marched in the parade and staffed a booth at Tom McCall Waterfront Park alongside our public safety partners in the Alliance for Safer Communities. Employees walked, drove, and rode their bikes in the parade, which was marshaled by the Portland Two Spirit Society. At the festival booth, members of the public were able to ask questions and learn more about DCJ, our mission, and our goals.

DCJ staff showed their enthusiasm: cheering; dancing; handing out stickers, pens, and candy; and engaging with the community. The festival draws tens of thousands of people with about 150 groups who march in the parade including various non-profits, corporations, religious entities, Oregon dignitaries and more.

DCJ employees marching in the 2016 Pride Parade.
This year's Pride Festival was the largest ever with over 8,000 people marching in the parade, an estimated 30,000 people watching, and thousands more celebrating at the waterfront festival and various other events around Portland.