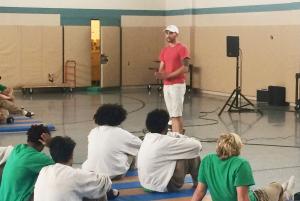 Noah Schultz Visits Detention on August 5th
At age 17, Noah Schultz was given a 7.5 year sentence for first-degree assault. Starting his incarceration at a Juvenile Detention Center, he was exposed to counselors and other inmates who for the first time in his youth showed him that he had the option to make positive changes to his life. Taking advantage of the opportunities presented to him, Noah received a degree equivalent to a High School Diploma along with two bachelors from Oregon State University.

Now he is a 24 year old adult with two degrees, a book of poetry described as a “documentation of a starving heart and resilient soul”, a clothing line, and a vast well of words which offer encouragement for those struggling to put their life back on track.

Ten months after completing his sentence, Noah visited the Donald E. Long Juvenile Detention Center, where he began his incarceration, to present his recently released documentary Perception: From Prison to Purpose and give a short lecture to the kids incarcerated there. The documentary showed Noah's transition from a happy child attending a private school, to a troubled youth living in a lower income neighborhood, to, finally, a responsible adult living up to his full potential. The video ended with a black screen that read: “Noah’s story is unique, but it doesn’t have to be”.

Noah followed his documentary with words of wisdom that applied to everyone in the audience, incarcerated or not. He explained that the world often encourages us to pursue the physical things in life, having the nicest car on the block, living in a beautiful house, and so on. However, “material things don’t solve internal problems”. Those that reach a point in their lives when they have fulfilled their material desires often realize they still feel empty. Speaking to the prisoners, Noah suggested that their incarceration has presented them with the unique opportunity to “have the time to look inside” without the distraction of technology and the outside world and “have time to develop past your peers”.

Noah ended his presentation with a short Q&A session. The questions ranged from impersonal ones asking about the meaning behind his tattoos, to more intimate ones such as asking for advice on how to deal with negative pressure from family members.

Through his positive energy and hard work Noah Schultz proved that there is a potential of a bright future for everyone, no matter what mistakes they have made in the past, as long as they are willing to “push [themselves] to step out and grow”.